Missed opportunities doom No. 3 Ole Miss as Mississippi State walks off with series 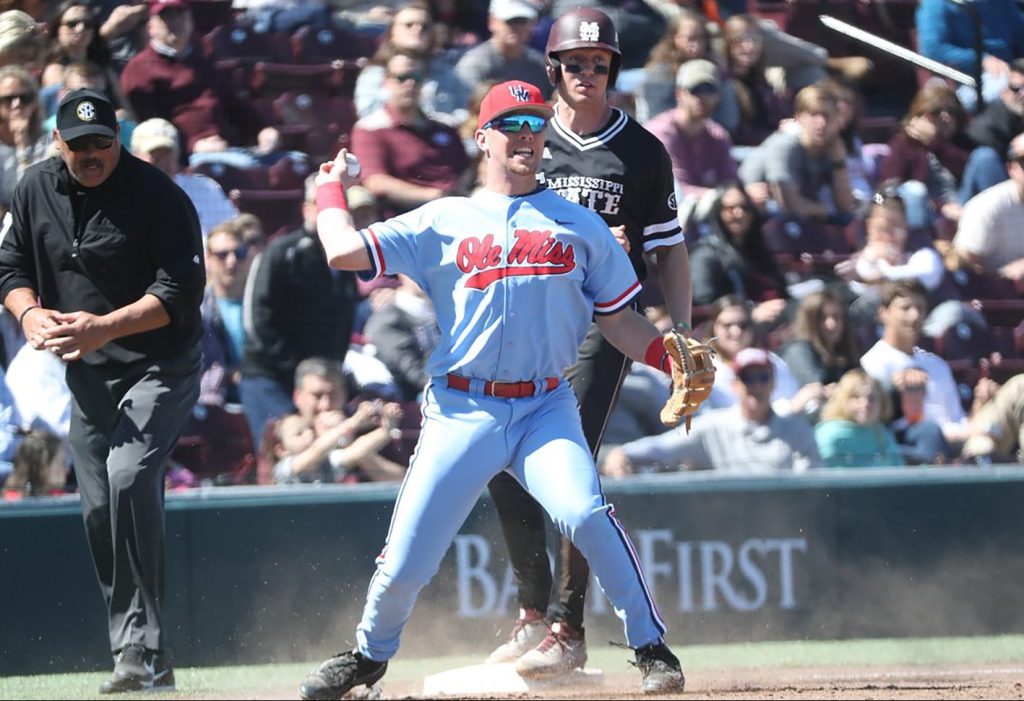 STARKVILLE — Ole Miss and Mississippi State spent all of Sunday afternoon trading baserunners. The Bulldogs eventually got the ones home that mattered.

The rubber game between the rivals went back and forth for 11 innings until Luke Alexander delivered the decisive blow with a walk-off home run to send Mississippi State to a 7-5 win, ending a four-hour, 17-minute game at Dudy Noble Field and one full of missed opportunities for Ole Miss. Alexander’s two-out, two-run shot into the Left-Field Lounge off Will Stokes resulted in the first series loss of the season for the third-ranked Rebels, who’ve lost three straight series to Mississippi State and seven of the teams’ last eight games dating back to 2016.

“I knew it as soon as it came off the bat. It felt really good,” said Alexander, a .228 hitter who had just three home runs on the season coming in. “I was looking for a fastball and he left it out over the plate, and I took advantage of it.”

Ole Miss (27-6, 7-5 SEC) outhit the Bulldogs (17-16, 4-8) 16-10 and produced 21 baserunners against four Mississippi State pitchers but left 12 on base, going just 3-for-12 with runners in scoring position. Yet Ole Miss rallied from a pair of deficits to lead twice — 3-2 after James McArthur shook off a 28-pitch first inning and worked around three walks to scatter four hits and strike out three in five innings and 5-4 after sacrifice flies from Will Golsan and Tyler Keenan erased MSU’s 4-3 lead in the ninth.

Keenan also hit a solo home run as part of a 2-for-4, two-RBI day while Thomas Dillard and Cole Zabowski each went 3-for-5. Ryan Olenek also had three hits for his eighth multi-hit game in the last nine for Ole Miss, which put multiple baserunners on in all but four innings and loaded the bases in the fourth and seventh frames only to come up empty both times.

MSU wasn’t much better with its chances, going just 4 of 19 with runners on and 2 of 9 with runners in scoring position. But the Bulldogs took advantage of the ones they got against the Rebels’ bullpen.

Right-hander Parker Caracci came on for Will Ethridge after MSU started the seventh with back-to-back singles. The Bulldogs tied it at 3 when Caracci airmailed his throw to first on Alexander’s bunt and took the lead on a double play later in the inning.

Caracci, who notched five- and six-out saves in his previous two outings last weekend against Arkansas but had not thrown more than 43 pitches in an appearance this season, went back out for his third inning of work in the ninth looking for the nine-out save. But Tanner Poole led off with a double and scored on an RBI single from Jake Mangum, who finished 5-for-5 and scored four times, to send it to extras.

“He’s never gotten nine outs. Not that he can’t, but with the lead and Ethridge feeling good today, we wanted to try to shorten the nine outs as much as possible,” Bianco said. “Unfortunately it was still nine outs with two guys on. The plan was if we could get an out or two or maybe even the inning, certainly he would start the eighth. But we weren’t even able to get an out.”

Blake Smith (3-0), who worked the final three innings for MSU, retired six of the seven batters he faced in the 10th and 11th before Alexander followed Mangum’s two-out knock by depositing Stokes’ 2-0 offering well over the fence in left.