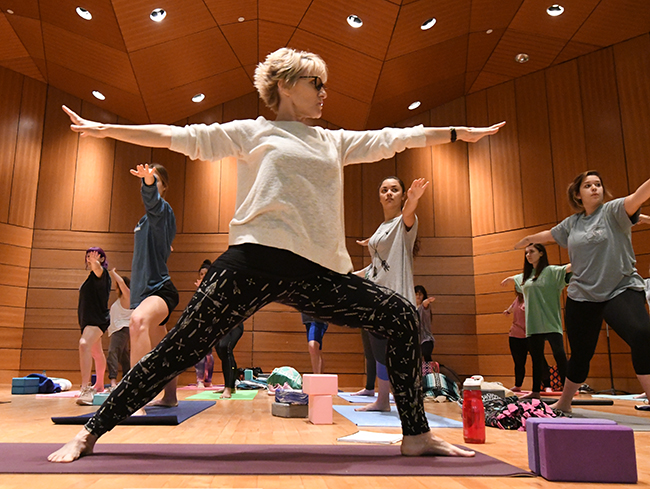 Performing live on a stage can be stressful for even the most accomplished musician, actor or public speaker.

Students at the University of Mississippi now have the option to use yoga as a means to combat that stress by taking Yoga for Performers, an actual credited elective class that meets Tuesdays and Thursdays on the stage of Nutt Auditorium.

The class was first introduced three years ago by Ole Miss voice instructor Jennifer Robinson who saw firsthand how yoga could help performers at the University Of Michigan. She took the classes there and then put together a proposal to present the idea of bringing the class to Ole Miss when she started working at the university.

“It was hard seeing some of these kids come out on stage and getting stuck or caught up in themselves and not being able to express themselves as they want,” she said. “We use yoga as a tool to help find that freedom.”

The music department and the liberal arts department approved the class to be part of the music curriculum as an elective.

“I give Ole Miss a lot of credit for allowing this yoga class,” she said. “It’s only the second university other than the University of Michigan that has it as part of its curriculum.”

The classes are limited to 25 students per semester. Students can take the class for two semesters. Other than learning and participating in yoga twice a week, students also have a midterm on anatomy and write a final paper reflecting on the semester and how yoga has helped them. Students taking the class for a second semester have to develop their own 30-minute yoga program and also write a final paper.

While the class focuses on performers, any student can take the class as an elective.

Music education major Ava Street is taking the yoga class for a second semester. The junior Ole Miss students said the course has helped her both on and off the stage.

“A lot of what we do in class is centered around connecting with your breath and body awareness, and I’ve really noticed a difference in my performances and in my singing in general,” she said.

Sophomore music education major Keely Kelso said she decided to take the class to help with her breathing and also to focus on her health.

“I used to be really active in high school but for the last few years, I haven’t had enough time to focus on my body, and I felt this class was something I could do twice a week and focus on my health,” she said.

Both Street and Kelso said they like the “eagle” and “tree” poses the best.

“The eagle pose makes me feel strong like I can conquer anything,” Street said. “Then I go into the tree and I fall but that’s OK.”

“You just get back into the pose and keep going,” Kelso said.