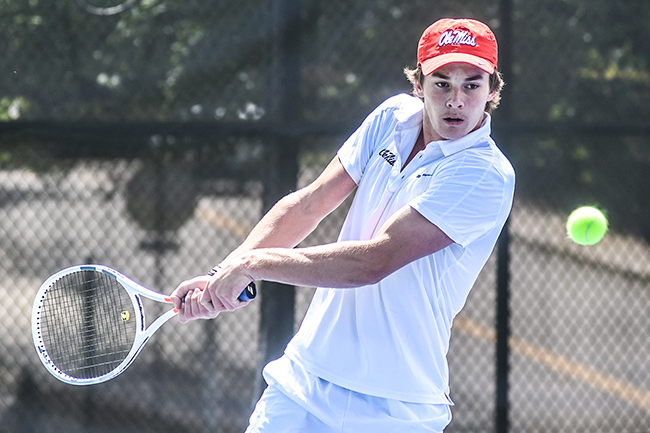 Rebels Fall to No. 7 Mississippi State 5-2

Mississippi State came out firing in doubles and took the top two courts 6-2 and 6-1 for the early 1-0 lead. Reynolds and Fabian Fallert led 5-1 on court three.

Reynolds put the Rebels on the board with a 6-2, 6-3 win on court six against MSU’s Arvid Nordquist.

State regained the lead with a win on court five, as Florian Broska beat senior Zvonimir Babic 6-3, 6-2. They closed out the match as No. 4 ranked Nuno Borges topped 30th-ranked Tim Sandkaulen 7-5, 6-1 on court one, and then 23rd ranked Giovanni Oradini finished off Fabian Fallert 6-3, 6-1 on court two.

“We had a great crowd today, even though it was quite cold in the beginning of the match. The guys were excited to see that. Unfortunately, we couldn’t get the doubles point today, but that was largely due in part to our opponents. They played really well in getting the crucial point. We did a good job of competing in singles, our effort and energy was good. Even though we didn’t get the win today, I see some positives. We played a really tough Mississippi State team but looking ahead to the next match I am optimistic that we can do well against Arkansas and heading into the SEC Tournament.”

On Reynolds and Hamilton’s wins…

“It was nice to see Finn continuing to play well at six and take care of his opponent in straight sets. Grey beat a guy who hasn’t lost an SEC match this year and someone they count on to win every time. He played at a very high level and it was nice to see him get a win on senior day with his whole family here.”

The Rebels hit the road next weekend to face Arkansas on April 15 at 1 p.m. in their final SEC regular season match.