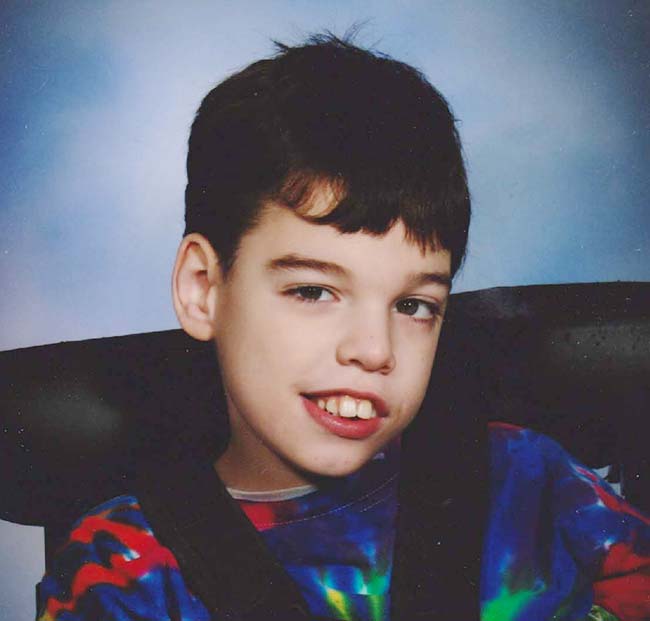 Logan Core, a teenager from Water Valley, has one wish – to receive birthday cards for his Sweet 16 on April 21.

Core is a typical child in many ways. He loves cartoons, superheroes and all things Spongebob Squarepants. However, the things that make him different, and his positive attitude, are what make him remarkable.

The course of Logan’s life was changed on March 30, 2003, when he became a victim of shaken baby syndrome at the hands of his biological father. Core was 11 months old at the time, and his mother, Miranda Core, was given a bleak prognosis. Her son was left with 80 percent brain damage, a severe form of epilepsy, a broken leg and severe damage to his optical nerves. The injuries, doctors said, were the equivalent of falling 10 stories and landing on his head.

While the family didn’t know what the future would hold for Logan, Miranda refused to let her son’s story go untold. Since that day, she has devoted her life to advocating for her son and other victims of SBS, as well as making sure abusers are punished to the fullest extent of the law.

“Logan’s voice was taken from him, and as his mother it is my job to be a voice for him, to make sure he gets what he needs in school and life,” Miranda said. “It is also important to me that I raise awareness and tell Logan’s story, as it is a story that sadly matches so many other children.”

At the time, Logan’s abuser was given the maximum prison sentence for child abuse, 20 years. However, he served less than nine years, and was released on parole. Outraged that child abusers could walk free while many victims are sentenced to live with their injuries, Miranda and her husband, Nick, worked with state lawmakers to pass “Logan’s Law” in 2005.

The law gives judges the option to sentence child abusers to life in prison, and makes a life sentence mandatory for repeat offenders.

Today, Logan is wheelchair bound and legally blind, although he has regained a little vision over the years. He has cerebral palsy and is considered receptive yet nonverbal, as his speech is equivalent to a toddler. However limited he may seem, Miranda said Logan understands more than he’s given credit for.

“Often, people who do not know Logan have a tendency to baby talk him. This is quickly met with agitation from Logan, as well as him telling them to stop,” she said. “He understands much of what is said to him on the level that a young child would, and while he cannot speak more than a few one to two word phrases, he has no problem getting his point across through a combination of the words he does say, facial expression, vocal tone and body language.”

His speech and motor skills are limited, but Miranda said she and Nick, whom she calls a blessing, strive to make sure Logan has as normal a life as possible, whether he’s at his special needs school or at home with his younger sister, 5-year-old Marley.

Although the road hasn’t been easy, both Logan and Miranda have found a support group of thousands, thanks to their SBS advocacy page on Facebook. That community, Miranda said, is one way to share their family’s journey and hopefully, prevent more children from getting hurt.

“The best solution for preventing shaken baby syndrome is to raise awareness and educate parents and caregivers about the dangers of shaking,” she said. “It is our hope that by sharing Logan’s story through his Facebook group ‘Logan’s Journey – Shaken Baby Survivor,’ that we are both raising awareness about shaken baby syndrome and its consequences and are also offering encouragement to others who may share this journey.”

April is National Child Abuse Prevention Month, and Logan’s birthday, April 21, falls during Shaken Baby Syndrome Awareness Week. Miranda said the decision to incorporate birthday cards for Logan into their mission to advocate for those with SBS is to show Logan just how much he matters to others.

“Logan won’t get to celebrate this milestone 16th birthday like other kids his age. He won’t get his first after-school job, he won’t be getting his driver’s license and he will not drive his father and I crazy wanting a car, just to name a few things,” she said. “Instead, what we are hoping for is that we can flood him with cards, nothing fancy, just cards from all over to show him how loved he is.”

A family friend hosted a similar birthday card drive for him a few years ago, resulting in over 450 cards and gifts, as well as the creation of a support group.

This year, especially, is one when cards are needed. Last week, the family’s beloved dog, Macy, passed away, leaving everyone, especially Logan, heartbroken. According to Miranda, Macy had been Logan’s companion since about six months after his injury, rarely leaving his side.

Logan has faced what some would consider insurmountable obstacles. In spite of his limitations, he still manages to bring positive energy to those around him.

“Logan struggles with an array of medical problems, yet he still finds a way to smile and bring joy to those who know him,” Miranda said. “He has overcome so many odds and is truly such a bright spot in our lives that we just want to make his day as special as he is.”