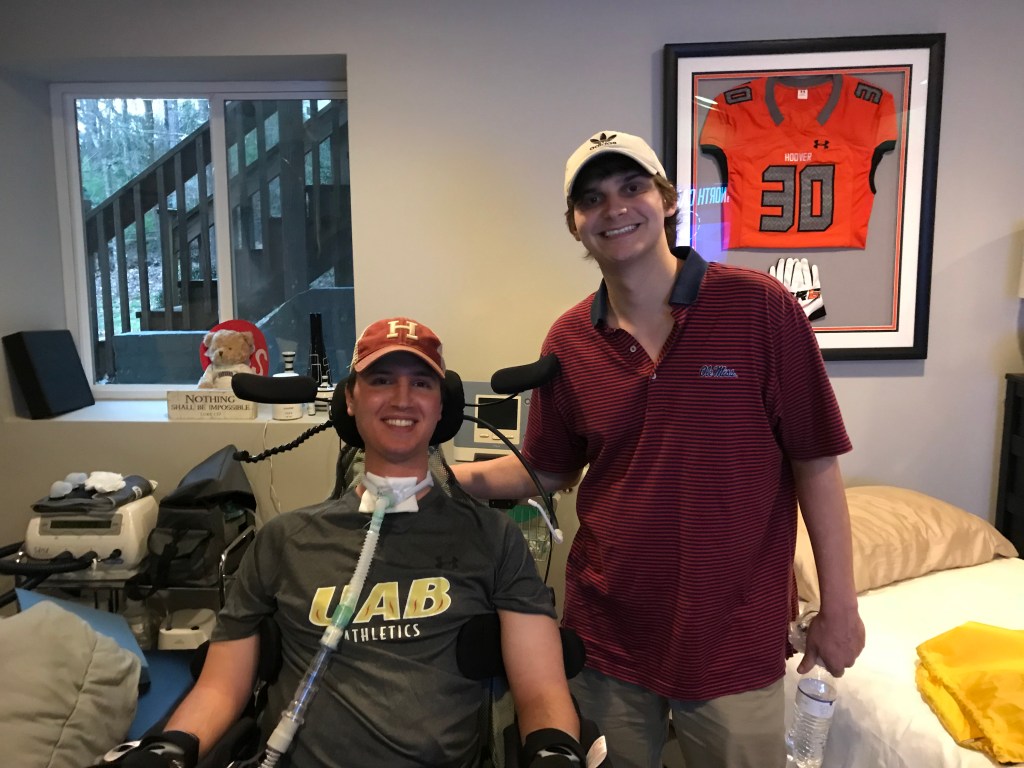 This year is the 29th installment of the game, which raises money in the name of the late Ole Miss football player Chucky Mullins, who became a quadriplegic after being injured in a game against Vanderbilt, to help others who are wheelchair bound with expenses and support.

Sigma Nu will face Alpha Tau Omega in this year’s Charity Bowl, scheduled for Thursday at 6 p.m. at Vaught-Hemingway Stadium on the Ole Miss campus. It begins with a cheer competition and the football game begins soon thereafter. The public is invited to attend the full-contact football game and admission supports the cause.

The Charity Bowl 2018 recipient is Ben Abercrombie from Hoover, Alabama. Abercrombie played football and baseball at Hoover High School and received a scholarship to attend Harvard. In his first collegiate game against Rhode Island in 2017, Abercrombie went to make a tackle but could not get back up due to a spinal cord injury.

Abercrombie has undergone surgery and extensive rehabilitation and continues the fight in recovery.

Sigma Nu philanthropy co-chair Nick Egorshin, a junior at Ole Miss, is from Hoover, so the selection of this year’s Charity Bowl recipient was an easy one.

“Ben is two years younger than me so I never knew him too well in high school, but I always heard his name when football was being talked about and I remember when he made the decision to play football at Harvard that all of Hoover was so proud of him,” said Egorshin, who also graduated from Hoover High School. “I thought it was awesome that he utilized his talent on the field and in the classroom to get himself into one of the most prestigious universities in the world.

“Ben did everything in his power to make sure he set himself up to go down the path to success, getting into an Ivy League school and playing Division 1 football. And for one play to put all that hard work and everything he was working toward on hold, completely changing his life, puts everything into perspective for the rest of us.”

Egorshin, Charity Bowl co-chairs with Ray Howard and Miller Frazier, said the connection between the Ole Miss, Oxford and Hoover communities is a powerful link making a difference. Sigma Nu typically gives at least $75,000 to its recipient, providing funds to aid with costs and rehabilitation stemming from the injury.

“Being from Hoover, I knew that this was a unique opportunity for me to connect Ben and his family to this amazing charity as well as link two very active and compassionate communities together in Oxford and Hoover,” Egorshin said. “Hoover gave a lot to me growing up and in many ways helped shape me to be the person I am today, and I think Ben would say the exact same thing. It has been rewarding working as a team to help such a worthy recipient.”

The Sigma Nu Charity Bowl was founded in 1990 to honor Mullins, who was paralyzed the previous season. Mullins was injured on a play in which he tackled Vanderbilt fullback Brad Gaines.

Ole Miss fans, college football fans in the South and people from all over the nation immediately began to donate money towards Mullins’ growing medical expenses. President George H.W. Bush visited Mullins in his hospital room and encouraged him while on a visit to Memphis.

Soon, Ole Miss established the Chucky Mullins Trust Fund to properly manage the donations. The city of Oxford donated land for a custom-designed, handicapped-accessible house for him. Donations to the trust fund eventually exceeded $1 million.

Mullins returned to the university on June 20, 1990 to resume his undergraduate studies, but less than a year later, he was stricken by a pulmonary embolism, caused by blood clots formed by inactivity and poor circulation. He died May 6, 1991 and was buried outside his hometown of Russellville, Ala.

Funding is raised for Charity Bowl primarily through program advertisement sales and financial donations. In the years since its inception, the Charity Bowl has grown to be the largest collegiate Greek philanthropy in the country.

Through the hard work of the active members, as well as the generous donations of chapter alumni and businesses across the nation, Sigma Nu has been able to raise and contribute more than $2 million to its recipients.