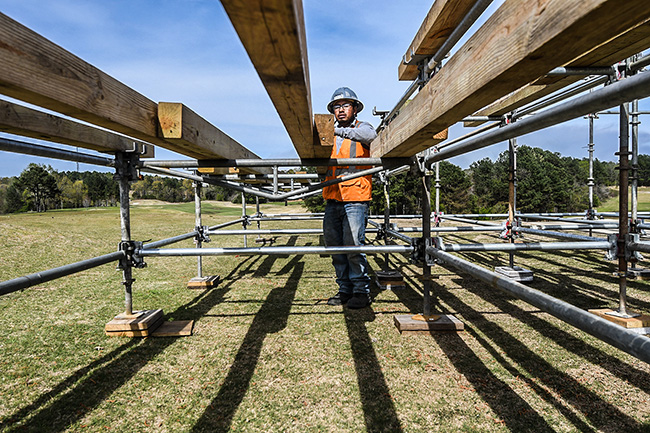 Wally of TentLogix works to set up seating on the first tee box in preparation for the Web.com Tour's North Mississippi Classic in Oxford, Miss. on Wednesday, April 11, 2018. (Bruce Newman, Oxford Eagle via AP)

Last June it was announced that Oxford would be hosting its first professional event with a stop on the PGA’s Web.com Tour coming to the Country Club of Oxford. Now, 10 months later, it is less than a week before some of golf’s best along with up and comers will tee it up in the North Mississippi Classic on April 19-22.

Oxford was considered for one of two new tournaments added to the 2018 calendar when members of the Web.com Tour approached Larry Britt, one of the owners of the country club, expressing their interest early last year. The college town made the cut and it made Mississippi one of only five states to host a tournament from all three tours (Web.com, PGA, Champions).

“Everything from a build standpoint is right on schedule,” tournament director Steve Jent said. “We got a little bit behind with rain that came in (last week). …we’re in good shape.”

Mother Nature has caused havoc in the early part of Spring with one of the wettest February’s in the state’s history as well as abnormally cold March. Those factors have made the golf course saturated with rain and with few days of sun having been strung together, until this week, it has taken a little time for the course to look like it should this time of year. But, it should be in playing shape come next week when players begin to arrive for practice rounds on Monday.

“The greens are in phenomenal shape,” Jent said. “They could be some of the best greens they see all year. Tee boxes are in pretty good shape. There are just a few holes where there are drainage spots where the water just collects and it just hasn’t been able to grow grass. So, from a distance it looks worse than it really is up close.”

Jent noted there could be spots on holes 16 and 17 where players might need to take relief.

There was not a tournament being played this week, which will allow players to come to Oxford earlier than they usually would if there was a tournament being held the week before. Some have already arrived and more will begin to trickle in over the weekend.

“They’ve all heard what to expect on the Square,” Jent said.

The 156-player field was announced in late March and there has been little turnover from the list that was initially revealed. PGA stalwarts Stuart Appleby, Brendan de Jonge along with other notable names such as former PGA Champion Shaun Micheel will be on hand trying to win the inaugural tournament’s title.

Ole Miss’ Braden Thornberry was also announced as player in the field with a special exemption he was given by the tournament. The reigning NCAA champion’s name being added to the field helped boost ticket sales as well as generate some local buzz.

“I think more than anything it’s just community awareness,” Jent said. “Whether it’s on campus or just in general in the Oxford area, ‘hey, Braden’s going to be playing.’”

The majority of volunteer spots have been filled but Jent said they could always take more.

It will be the first of two busy weekends in Oxford with Ole Miss hosting Georgia in baseball next weekend followed by Double Decker weekend and another Rebel home baseball series with LSU. The tournament has been working with city officials, getting all logistics in place for a smooth four days for tournament goers.