No. 5 Ole Miss starts series at No. 15 Vanderbilt with emphatic win 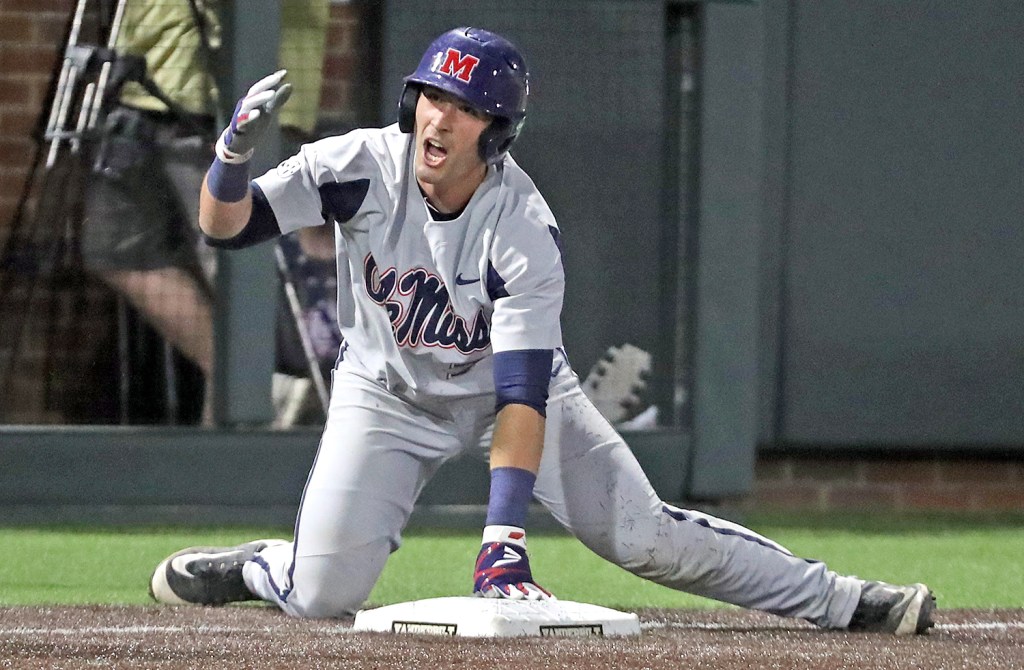 NASHVILLE, Tenn. — Ole Miss has responded to the worst baseball it’s played all season with some of its best.

The fifth-ranked Rebels got another solid outing from Ryan Rolison and pounded out 14 hits en route to an 11-3, series-opening win over No. 15 Vanderbilt on Friday at Hawkins Field. Game 2 is slated for Saturday at 2 p.m. with the teams set to wrap up the series with a 4 p.m. first pitch Sunday.

Squarely in the hunt for an SEC Western Division title and a national seed, Ole Miss outscored the Commodores 10-1 over the final seven innings, erasing a brief 2-1 deficit on the way to another emphatic win since its first series loss of the season last weekend at Mississippi State. The Rebels (29-6, 8-5 SEC) have won their two games since by a combined 22-6 and haven’t committed an error since seven of them led to six unearned runs for the Bulldogs, who fell back into last place in the Western Division with a loss to Auburn on Friday.

“Be who we are,” Ole Miss coach Mike Bianco said. “(Vanderbilt) is good and they’ll be ready tomorrow, but we played really well and you have to do that. There have been some games, like in Starkville, where we didn’t play well and we lost a game. This team continues to respond.”

Ryan Olenek extended his hitting streak to 13 games by going 4-for-5 — his 10th multi-hit game during that span — with a career-high four runs scored. Nick Fortes went 3-for-5 with a double, a triple and three RBIs while Thomas Dillard also had three hits and drove in a run.

Will Golsan finished 2-for-3 with his first home run of the season — a solo shot in the seventh — as the No. 2-6 hitters accounted for all but one of Ole Miss’ hits and combined for seven RBIs.

“We’re just trying to hit pitches that (Vanderbilt starter Drake Fellows) gives us,” said Olenek, who raised his average to a team-best .400. “No one hits good sliders, not even big-leaguers, so you’re just trying to get mistakes. We just took advantage of their mistakes and won more pitches than they did.”

The Rebels ran Fellows (4-2) after 5 ⅔ innings, responding after leaving the bases loaded in the first to tag the sophomore right-hander for season-highs in hits (8) and runs (6). Neither starter got out of the sixth with Ole Miss’ Ryan Rolison exiting after a two-out single in the bottom half of the frame.

Rolison (5-3) needed 108 pitches to get that far, fighting the command of his fastball early but pitching out of trouble before settling in. Back in his usual Friday night slot after swapping rotation spots with Brady Feigl last weekend, Rolison limited Vanderbilt (20-14, 7-6) to two runs in the first after the Commodores started with three straight singles against the left-hander and got back-to-back strikeouts in the third to escape a two-on, one-out jam and preserve a 4-2 lead that only expanded from there as Ole Miss matched its highest run total in an SEC game (11-10 win over Arkansas on March 31).

“We just didn’t play our best baseball down in Starkville, and that hurts us because we just know we’re capable of so much more,” Olenek said. “It feels really good to come out and play some good baseball the past couple of days.”

Rolison, who’s allowed just three earned runs in his last two starts, held the Commodores to three hits over his final 4 ⅔ innings of work and worked around three walks while striking out eight. Will Ethridge followed with 2 ⅓ innings of one-hit relief while freshman Max Cioffi worked a clean ninth.

“That’s what we struggled with last year was starters going deeper into the game,” Rolison said. “I’ve got to limit walks. I needed to go right at people. The fastball command hasn’t been there as I would like it to, so we’re going to get back to work on that and just attack the zone. I think if I do that, I think I’ll be able to get later into games.”

No. 5 Ole Miss responds to rough weekend with…