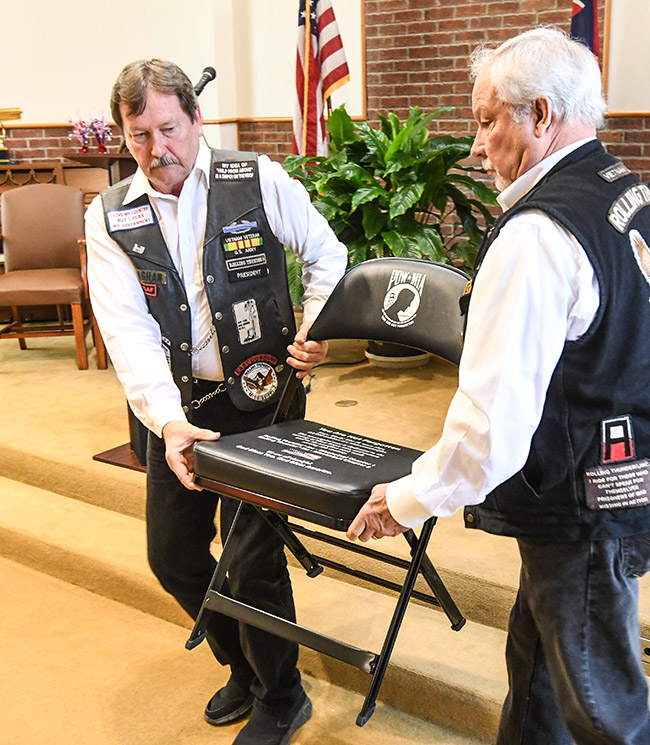 The Mississippi State Veterans Home in Oxford has a new chair.

However, this chair will remain empty to symbolize the more than 91,000 prisoners or war and soldiers missing in action who never came home.

Rolling Thunder Mississippi Chapters 1 and 2 presented the chair during a brief ceremony Thursday at the veterans home.

The first POW/MIA chair appeared in 2008 in Smoke Stadium in Kodak, Tennessee.

“The chair became a sacred symbol representing the heroism of the lost soles that perished in the fight for freedom,” said Glynna McKendree, with Rolling Thunder Mississippi, Chapter 1.

There are now 20 chairs placed in various locations around the county and another 250 chairs slated to be created and placed.

“There is not a more prestigious place to put this chair than the Veterans Home here in Oxford,” McKendree said.

Guest speaker local attorney Lt. Col. Rhea Tannehill said another way to honor POW/MIA and their families is to serve.

“You can come to this veterans’ home and shake the hands of these men and women and get to know them a little bit,” he said during the ceremony. “You honor them by voting. You honor them by being involved in your community and serving other veterans, and you don’t forget them.”

After Tannehill spoke, Rolling Thunder members carried the chair through the small crowd gathered at the ceremony and placed it on a chained-off platform in the lobby of the home.