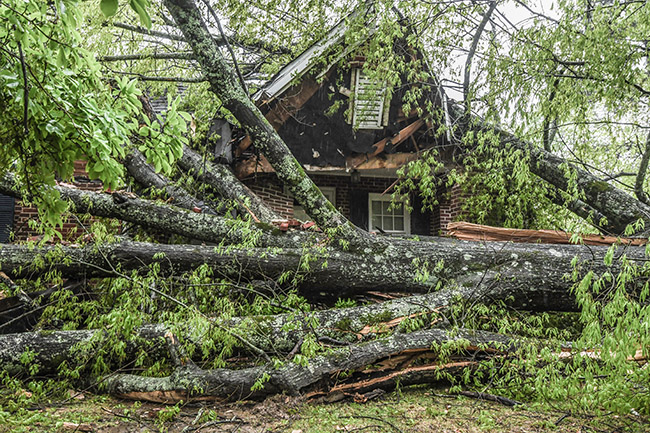 Straight-line winds associated with a cold front moving into Lafayette County early Saturday morning caused damage to several homes and knocked down dozens of trees, knocking out the power for about 3,000 homes.

Tornado sirens went off at about 5 a.m. Saturday as the storm went over Lafayette County. Rotation was spotted in the clouds; however, no tornado was reported to have touched down during the storm.

Lafayette County Emergency Management Coordinator Steve Quarles said trees were downed all over the county; however, the most seemed to fall in the northeast quarter of the county.

“Highway 30 was blocked for a period with several trees and utility lines down,” Quarles said.

“We had a section where about seven homes were damaged,” Quarles said. “One had a section on the rear (of the house) where decking and rafters were torn off.”

“The damage in this area appeared to be more from straight-line winds,” he said.

Three utility poles were broken on CR 215, according to Keith Hayward, general manager of North East Mississippi Electrical Power Association. Electric lines were torn down on CR 313 and along Highway 30 in several areas in both Lafayette and Union counties.

“At the peak of the storm, we had approximately 1,500 members out of power,” he said Saturday afternoon.

Inside the city of Oxford, the Oxford Electric Department reported about 1,500 customers were without power.

“We cleared a couple of trees along major lines, sectionalized the system and got the majority back on by 7 a.m. From there we worked numerous trees in different areas of town, restoring power to customers along the way.”

Power was restored to most OED and NEMEPA customers by 1 p.m. Saturday.

A tree fell on a house on North 14th Street.

Oxford’s Gordon Whitwell making a name for himself in…