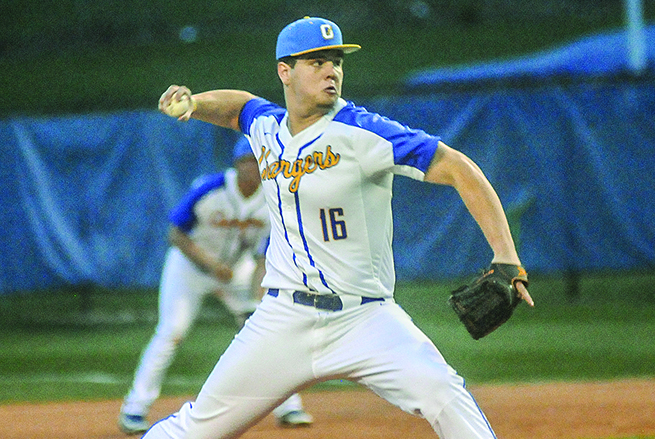 Seven years ago during his first season as head coach, Chris Baughman faced – and lost to – Northwest Rankin. It was his first taste of Class 6A baseball and knew that if Oxford ever moved up to the top of high school baseball in Mississippi it would be a challenge.

The Chargers made that move to 6A this season and made the challenge not look so hard, defeating South Panola 15-5 in five innings at Edwin Moak Field on Friday night. The win clinched the Region 2-6A title with a 7-1 record, currently.

There is still one more region game to be played on Tuesday at Tupelo but having already taken two of three from the defending 6A champions the game means nothing in the region title picture.

“I looked forward to the challenge but I also knew how much harder it would be,” Baughman said. “For us to win a division title in 6A is huge. Now obviously, it’s not the ultimate checkbox but to do it obviously we can just loosen up next Tuesday and play. It sets up our pitching rotation for next week really nicely.”

With the region title Oxford becomes the No. 1 seed out of the region and earned a bye in next week’s first round of the Class 6A playoffs. The Chargers (18-6) will await their opponent for the second round, which begins on April 27.

It is also the fourth straight region title for Oxford, who won the 2-5A title three straight times over New Hope and can now add the 2-6A crown to the list in their first season in Class 6A.

Friday night looked to be a coronation of sorts for the Chargers, who were cruising early against South Panola (11-12, 4-5) — who is the No. 3 Seed — on Senior Night. Oxford jumped out to a 3-0 lead in the first two frames with senior Tyler Smith in control early on the mound.

The home fans grew a little restless in the top of the third inning when South Panola’s Blaine Ware took a pitch over the left center field wall for a grand slam, giving the Tigers a 4-3 lead. It was the only hiccup for Smith, who pitched a complete game and finished with nine strikeouts while giving up five runs off seven hits.

“I left a pitch up,” Smith said of the home run. “With the wind blowing I knew I needed to keep pitches down and I just started trusting my off-speed more and tried to work that in.”

The Tigers added an insurance run in the fourth inning but that is when the Oxford bats would heat up. The Chargers scored 12 unanswered runs, including nine in the bottom of the fifth for the run-rule victory.

Second baseman Sam Bianco went 2-for-2 with three runs scored and a run batted in, including a leadoff in-the-park home run in the first inning. Bianco hit a double then tried for third and eventually scored off one of South Panola’s five errors on the night. Parker Stinnett went 2-for-2 with an RBI and CJ Terrell went 2-for-3 with 3 RBIs.

The rally began in the fourth when Oxford had the bases loaded. Shortstop Drew Bianco cleared them all with a 2-RBI double and then the third run scored off a throwing error. When the older Bianco slid into second base he injured his left hand, spraining his thumb and forefinger. Baughman kept him out of the rest of the game as a precaution but is not concerned the senior —who did not bat in the early part of the season due a right wrist injury — will miss any playoff time.