Oxford’s Gordon Whitwell making a name for himself in tennis 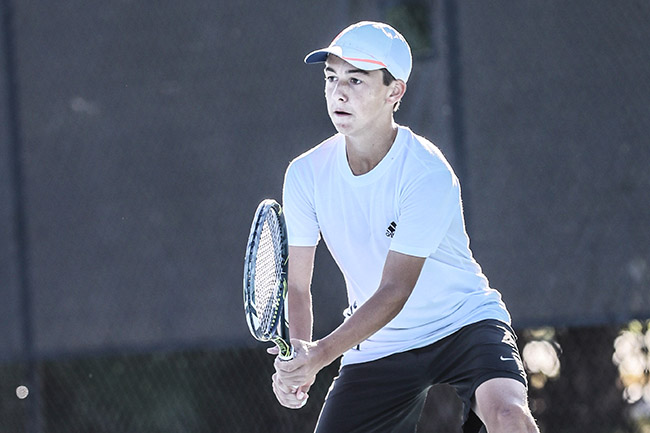 The tennis standout had been working on his game every day of the week since a very young age, determined to compete and win at a high level. The only irony is that discovering tennis was an accident.

“I wanted him to play an individual sport, but he had a golf club in his hand from the time he was in diapers, and his hand-eye coordination proved early on to be special,” Gordon’s father, Quentin Whitwell said. “He called himself Gordon ‘Golf Club’ Whitwell from the time he could talk and walk. But his mother had other plans.”

The tennis discovery happened at age seven when Whitwell decided to fill in at the last minute for a tennis lesson with his sister.

It was a dual lesson Davis Whitwell was scheduled to take with her friend, but when her friend missed the lesson, Ginger, Gordon and Davis’ mother, had Gordon substitute in. He was moving balls around the court with the precision and experience of a youngster who had been playing the game and taking lessons his whole life.

“This young man needs to be playing tennis,” the pro at Parham Bridges Tennis Center told the Whitwells.

From that moment, Gordon was hooked, winning the Boy’s 10’s title in USTA Southern doubles, the first of many tournament wins. He learned the Association of Tennis Professionals (ATP) style of strokes from Julio Godreau and, upon arriving in Oxford, earned a spot on the Oxford High School team as a seventh-grade student, winning an individual state championship in singles in addition to helping the Chargers earn a team title.

His signature forehand won Whitwell another state championship last season in doubles for the team and in the individual contest for mixed doubles as an 8th-grade student.

For many Oxford residents, Whitwell starring in tennis was shades of Whitwell’s uncle, Fletcher, who was a standout tennis player in Oxford with a good backhand, winning high school championships every year from 7th through 12th grade and obtaining a top 20 ranking for his age group nationally.

Fletcher was known as the player top national players dreaded to find in their draw, knocking off such famous players as John Roddick at the Nats in Kalamazoo, Mich. Friends and family say the comparisons are natural since Gordon has the same desire to excel.

That’s one reason why you won’t find Whitwell’s name on the Oxford High School tennis roster this year.

After time last summer at Rick Macci Tennis Academy in Boca Raton, Fla, Gordon urged his parents to find a place where he could join the ranks of the elite players in the nation. Recognizing he wanted to spend more time developing his game, his parents relented, and Whitwell transferred to the prestigious Smith Stearns Tennis Academy in Hilton Head, S.C., one of the top facilities in the country for developing junior tennis players (former world No. 1 Stan Smith is a staff teaching pro).

By competing in competitive tournaments in places like Boca Raton, the year before, Whitwell began to see that he could rise on the national level with more focus on the game.

“Gordon has really excelled in his first year at the academy, and a lot of that can be attributed to the dedication he has put into his tennis,” said BJ Stearns, director at Smith Stearns Tennis Academy. “He not only does what he has to do but he does the extra small things too. It has been great to watch his personality and confidence grow on and off the court.”

It’s much different than the traditional high school experience, and he misses friends and teammates in Oxford, Whitwell said, but it’s an opportunity to develop his game that got Gordon to the tennis academy.

He now trains five hours a day in addition to his fitness program and attends local private school Heritage Academy in addition to taking some online classes to fulfill his education requirements. The hard work is paying off as he is hitting his growth spurt.

“Playing at Oxford was such a wonderful experience for Gordon,” said Whitwell. “Coach (Louis) Nash is legendary in Mississippi; he is such a motivator and inspiration. Gordon was in seventh grade playing with these high school players. He had some incredible matches when he was playing kids from all over the state 10th, 11th and 12th grade. He’d be down a couple of match points, and he would dig in, and instead of playing tight he would rip the ball and end up winning the match. You could tell he wanted it.”

Whitwell said Gordon’s drive to get better and love for the game dictated this move to the tennis academy.

“Gordon is a perfectionist and one of the hardest working young men,” said Whitwell. “He was dragging me on the tennis court 5:30 to 6 in the morning two to three days a week when he was nine and ten years old before school. It’s always been that way for him. We wanted to help him have that outlet to spend more time working on his game and were willing to make that sacrifice. Thanks to BJ Stearns and the staff at Smith Stearns, he now has the components needed (to play at a higher level).”

One of Whitwell’s ambitions is to play Division 1 college tennis, and Smith Stearns helps in that development because such facilities give players competition among the best in the country in their age group, combined with the best of instruction. Smith Stearns is committed to developing the mind and the body to produce great players who are also great kids off the court.

“Gordon takes two or three private lessons a week,” Whitwell said. “They work on specifics of the game like hitting patterns and a fiery serve. Then, he’s practicing and playing all the time. He’s out there working with blue-chip, five-star type players, some of the elite. These are kids who are going to Georgia, Duke, Wofford, Louisville and Nevada on scholarships. And that’s the ultimate goal for these athletes, to get into position to play at the collegiate level and compete.”

“Gordon’s goal is definitely to be a D1 player, and that’s really what he wants to do,” said Whitwell. “Who knows? Maybe this work away from home now will allow him to come back home one day and play for Ole Miss.  He left here a two-star recruit and is in line to be at least a four-star recruit by the time the new rankings come out in September from Tennis Recruiting. In the last few months, his mom and I have watched him win some big matches. We are very proud of him.”

David Magee contributed to this story.