No. 5 Ole Miss’ bullpen falters as No. 15 Vanderbilt evens series with walk-off win in extras 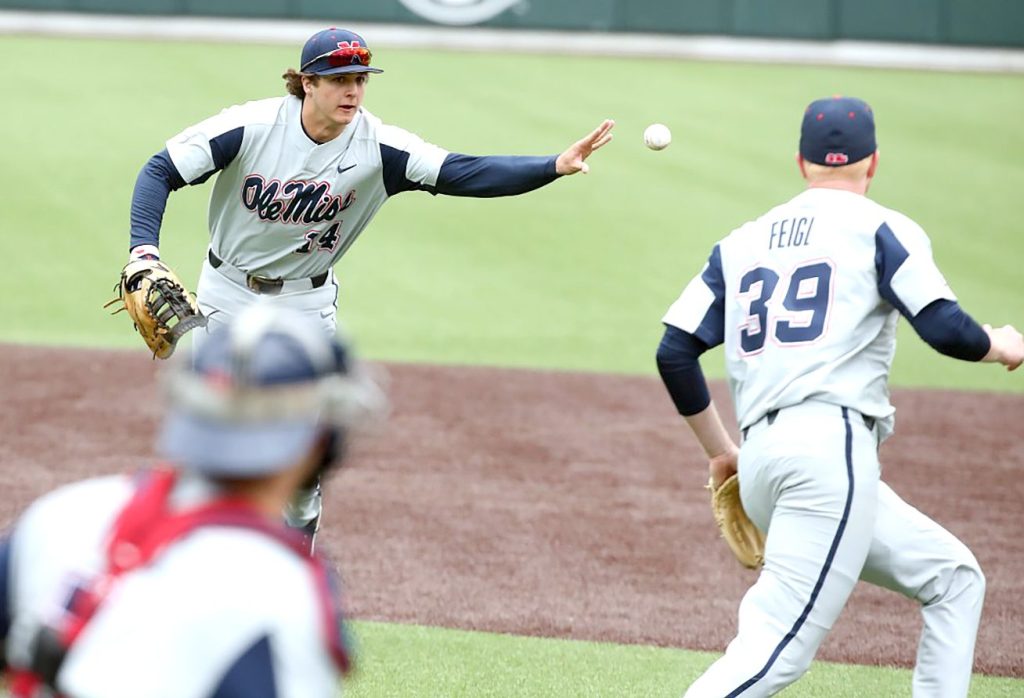 NASHVILLE, Tenn. — The battle of the bullpens went to Vanderbilt, even if it was an ugly one.

Pat DeMarco ran home on a wild pitch to send the 15th-ranked Commodores to an 8-7 walk-off win over No. 5 Ole Miss in eight innings in the first game of Sunday’s doubleheader to even the series at Hawkins Field. The Rebels will try to avoid their second straight series loss in the second seven-inning game, which will start at 4 p.m.

The teams combined for 12 runs over the final three innings with Ole Miss (29-7, 8-6) facing a 5-2 deficit heading into its final at-bat after the Commodores (21-14, 8-6) put up a three-spot in the bottom of the sixth with a two-out, two-run double from Philip Clarke and an RBI single from Connor Kaiser off Parker Caracci, who relieved Brady Feigl with one out in the frame after Feigl gave up four runs (three earned) on two hits while walking two and striking out four.

Cole Zabowski and Will Golsan started the top of the seventh with singles before Zach King hit back-to-back batters to force in a run. A groundout by Jacob Adams got the Rebels closer and Grae Kessinger tied it with a sacrifice fly before an infield single from Ryan Olenek, who also had a home run to extend his hitting streak to 14 games, gave Ole Miss a 6-5 lead.

Caracci returned for the seventh and hit Stephen Scott to begin the home half of the frame before Scott stole second with nobody out. Caracci got a strikeout and a flyout for the first two outs and was a strike away from clinching the series for the Rebels, but Austin Martin’s infield chopper just past the pitcher’s mound allowed Scott to score the tying run.

Ole Miss led again in the eighth after Thomas Dillard doubled and Golsan brought him home with a sac fly, but Ethan Paul greeted Dallas Woolfolk (1-1) with a long home run to right to start the home half of the frame. Woolfolk gave up a single to DeMarco before being relieved by Greer Holston, who allowed another single before intentionally walking Scott to set up the possibility of a forceout at any base.

Holston struck out Julian Infante, but his final pitch to Ty Duvall got past Nick Fortes to the backstop, allowing DeMarco to scamper home with the winning run.

Ole Miss’ bullpen has blown four leads in the last two losses. Caracci, who’s had four straight multi-inning outings, threw 48 pitches a week after throwing a season-high 50 in his only appearance last weekend at Mississippi State, allowing two runs on three hits with two strikeouts and a walk in 1 ⅔ innings. Woolfolk didn’t retire either of the two batters he faced.

The teams combined for 11 hits over the final three innings, nearly tripling their total from the first five frames with Feigl locked in a duel with Vanderbilt’s Patrick Raby, who didn’t allow a hit until Golsan’s one-out single in the fifth. Raby went six innings, allowing two runs on three hits while walking two and fanning three.

Olenek and Golsan each went 2-for-3 and combined for three RBIs while Tyler Keenan had an RBI double. Clarke drove in three runs for Vanderbilt.