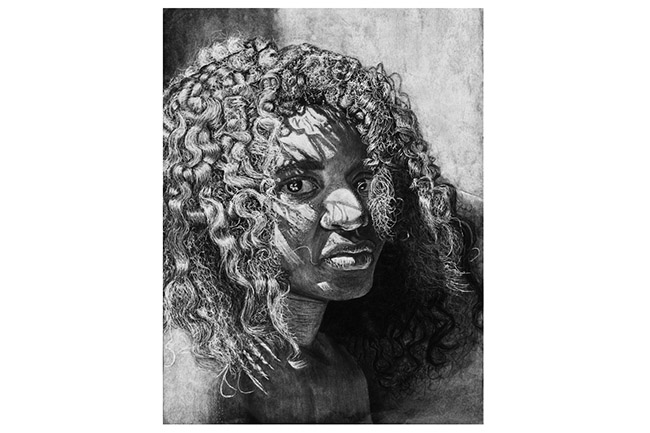 Khyan Freelon, a junior at Oxford High School, has won a Scholastic Art & Writing National Gold Key for “I Too Am America”.

Khyan Freelon, a junior at Oxford High School, made his mark on the art world last week, when he won a Scholastic Art & Writing National Gold Key award for his drawing “I TOO AM AMERICA.”

Freelon is one of four students from Mississippi to win the gold medal, and will be traveling to Carnegie Hall in New York City to accept the award. Out of more than 350,000 entries nationwide, he is one of a select few whose work will tour across the country for the next two years.

For Freelon, artistic expression goes beyond the confines of the classroom. It’s a passion he hopes to one day turn into a career, he said.

“I never would’ve imagined this, but I mean, God, I put Him first, so He’s taking me places and putting me ahead of the game with my art,” Freelon said. “I’m thinking about finding a good college of art or becoming self-employed as a local artist who does commissions and other entrepreneurial things.”

Achieving this level of success at such a young age is something Freelon said he couldn’t have done without his art teachers, Duran and Ebony Johnson. The husband-and-wife team said Freelon is more than just a student to them – he’s like their adopted son.

“Khyan hits close to home, because I know where he came from, and I know everything that’s up against him. It is very hard, especially to be an African-American male in Mississippi, dealing with where you fit in, your race and how you feel about yourself,” Ebony said. “His mom is so amazing, and she works so hard to take care of her boys. For it to go to him, God had His hand over him. It means so much for it to go to Khyan. It’s not just the art, it’s validating him as an artist, validating him as a black male and validating him that Mississippi does not have to be his stopping point.”

The value of hard work is not lost on Freelon, who often stays after school or asks to come to the studio on weekends so he can perfect his craft.

Freelon’s gold medal-winning piece is a portrait of a classmate, titled “I TOO AM AMERICA” and drawn with black and white charcoal and white ink. Many of his pieces, he said, are inspired by his experiences as an African-American teenager who doesn’t necessarily fit the mold society has laid out for him.

He stands solidly over 6 feet tall, but hasn’t played football since middle school even though he said he’s told he should play almost daily. He tried band for a year, and theatre, too. After trying to find where he fit best, Freelon said he preferred to put his time and energy into academics and his art.

This decision is one Duran Johnson said he has encouraged, especially considering his student’s natural artistic ability.

“When I first met Khyan, it was the second semester of his freshman year. Like anybody else, he’s a big kid, so I assumed he played football. He was like, ‘No, I stopped playing football in 8th grade,’” Duran said. “For a kid like that, in high school as a 9th grader, to say his grades are more important to him than playing a sport, especially in the black community where sports are viewed as a way out and most of the time everybody is pushing you saying it’s the only way you can go to college and make it, it’s a decision he made for himself.”

Freelon first started seriously pursuing art when he was in the 9th grade and enrolled in Duran’s Visual Art I class. The Johnsons said he is known for working meticulously in order to make sure each of his drawings are perfect, and that same dedication bleeds over into his schoolwork, as evidenced by his 3.3 GPA.

Regardless of what others might try to push him to do, Freelon said he refuses to do anything but follow his own passion.

“Other people come up to me and say, ‘You should play a sport,’ or ‘Your height and weight is just a waste, what are you doing?’” he said. “So I decided, I’m going to prove to everybody that art will take me farther than you think it’ll take me. I feel like I’ve really proven that now.”

The Johnsons said being able to help Freelon reach his full potential is one of the reasons they go to work every day. Watching him develop as an artist and find self-confidence in his work and himself as a person is the real reward, Ebony said.

“I love the fact that we were blessed to be able to teach Khyan,” Ebony said. “He’s not our student, he’s our adopted son, so even when he graduates, whatever he needs in terms of mentorship, support, whatever, we’ll always be there. But this moment belongs to him. And his mom, too – she’s going to cry.”