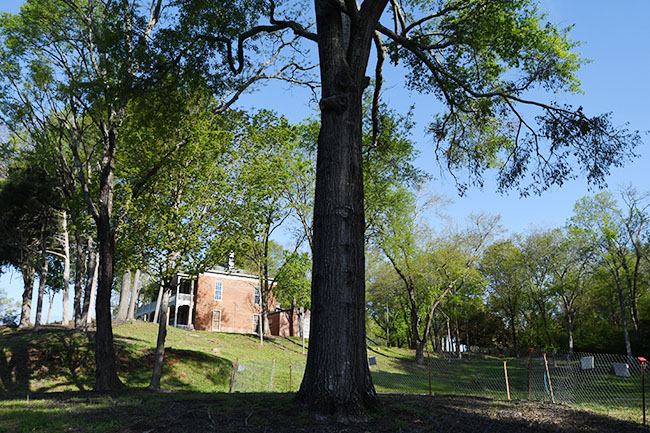 The Oxford Historic Preservation Commission approved a Certificate of Appropriateness for a 4-foot retaining wall around Shaw Place, located on East Jackson Avenue in Oxford, Miss. on Tuesday, April 17, 2018.

For the second time, the Oxford Historic Preservation Commission approved a Certificate of Appropriateness for a 4-foot retaining wall around Shaw Place, which is part of the development around the old Shaw house that is being restored by developers.

The commission granted the first COA in 2013; however, COAs are only valid for a year after being granted.

“We’ve been so busy on other projects,” said architect Thomas Ryan. “We are seeking approval for this fence so that we can move forward.”

The 4-foot brick fence will be topped with wrought iron. A rendering from the 2013 submission shows shrubs in front of the wall that will run along a sidewalk in front of the development.

The commissioners asked if there would be enough room between the fence and the sidewalk to make sure landscaping can be put in to reduce the impact of the fence.

Ryan said there would be room except directly in front of the Shaw house due to the topography of the hilly area.

Commissioners approved the fence but with conditions that they submit a landscaping plan to the HPC before construction.

Developer Sid Brian purchased the historic 1800s home and the five acres surrounding it about five years ago. He agreed to restore the Shaw house and divided the property up into a four-lot subdivision with the first lot being the Shaw house. The second lot, known as Kennedy Cove, will consist of four custom homes. Shaw Place will consist of six custom homes. The last lot will have one single-family home on 1.5 acres of property.

Some restoration has been done to the Shaw house, but no new construction has been started on the other lots.