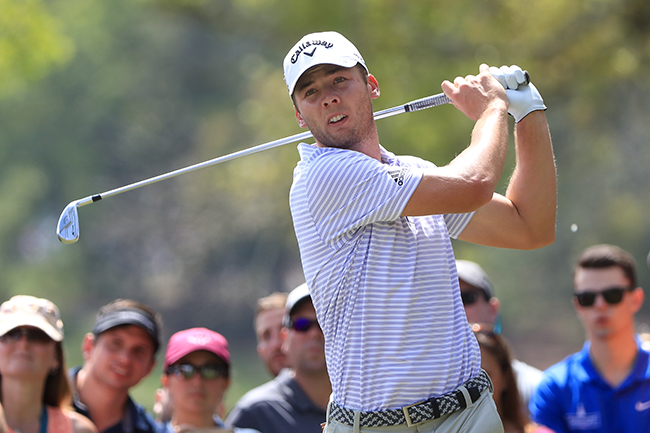 PALM HARBOR, FL - MARCH 11: Sam Burns plays his shot from the second tee during the final round of the Valspar Championship at Innisbrook Resort Copperhead Course on March 11, 2018 in Palm Harbor, Florida. (Photo by Sam Greenwood/Getty Images)

This time last year Sam Burns was finishing up his sophomore year at college. What a different a year makes.

The former LSU Tiger announced his decision to turn professional last September and over the past eight months has cultivated one of the hottest starts to a PGA career with two Top-10 finishes on the PGA Tour and a win on the most recent Web.com Tour stop two weeks ago in Savannah, Georgia.

“I was hopeful, obviously, but I felt like I was playing some pretty good golf and just trying to find my stride a little out here,” Burns said. “Everything’s somewhat new with me being a rookie. It’s been really fun so far.”

Burns, the 2017 SEC Player of the Year as well as the NCAA Division I Jack Nicklaus National Player of the Year, made his first pro start on the PGA Tour last November in Las Vegas in the Shriners Hospital for Children Open. He finished tied for 20th with a score of 3-under par.

His next best finish is the one Burns is much more known for where he placed tied for eighth in the Honda Classic in February. Burns shot a final round 68 to finish 2-under par and six shots back of Justin Thomas who won in a Monday playoff.

The finish is worthy of discussion on its own merit but it was who he was paired with during that final round that drew the biggest attention. Burns, the upstart 21 year-old shared a Sunday group with an aging 42 year-old Tiger Woods who was trying to find his way back to form.

“It was crazy, especially with all the people watching,” Burns said. “As a kid you always kind of dream of playing with somebody like that. Even if it’s not even Tiger, it’s somebody that you watched growing up. It was an experience I will be able to look back on for the rest of my life and have a cool story and one day be able to share with my kids.”

On that particular day Burns bested Woods by two strokes. His success has helped him continue to play on the tour with a Top-15 finish coming at the Arnold Palmer Invitational at Bay Hill last month.

Not yet qualified for the Tour, Burns is on the cusp of earning his Tour card and can do so if he finishes in what the Web.com Tour calls ‘The 25.’ It is the top-25 golfers on the money list who have a shot at earning a PGA Tour card at season’s end. Currently Burns is fourth on the list with $152,357 earned this year.

Burn’s path is one similar to what Ole Miss’ Braden Thornberry may take once he finishes up school. The two are very familiar with each other having played against each other the past couple seasons in the collegiate ranks and at the junior golf level. Thornberry won the 2017 Fred Haskins Award, naming him the top male collegiate golfer. Burns was one of the three finalists for the award.

The two are both in this week’s North Mississippi Classic Field and the idea of maybe finding themselves paired together late in the weekend is appealing to at least one of them.

“We’re good buddies and we still keep in touch a lot,” Burns said. “I’m really looking forward to seeing him this week. …Hopefully a Saturday or Sunday round (together) towards the end of the day. I think that would be fun.”