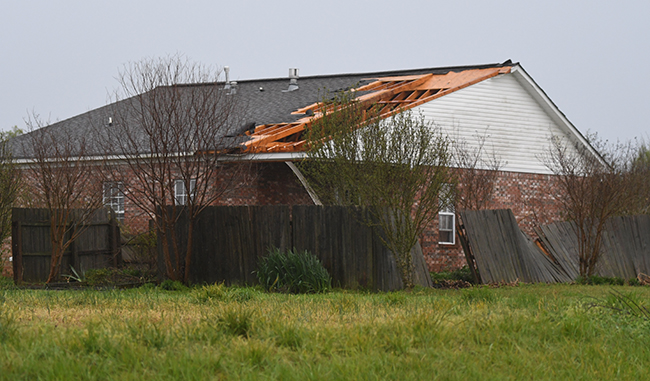 A house on Woodson Ridge Road was damaged during a storm that passed through the area, near Oxford, Miss. on Saturday, April 14, 2018. The National Weather Service said an EF1 tornado was on the ground for about a minute in the Woodson Ridge area before dissipating. (Bruce Newman, Oxford Eagle via AP)

According to the NWS, the first tornado registered as an EF1 with peak winds at 90 mph. It started at 4:48 a.m. Saturday in a wooded area west of County Road 215. The tornado damaged the roofs of several homes and farm buildings and destroyed three smaller outbuildings. The tornado crossed the road and damaged a home while uprooting several trees in the area before dissipating about a quarter of a mile east of CR 215.

At 4:49 a.m., a weaker tornado touched down and moved along Highway 30 to the east and north of Oxford. The tornado registered as an EF0 with peak winds reaching about 75 mph. It uprooted several trees and caused minor roof damage to a few homes along Highway 30.

Both tornadoes lasted about a minute before dissipating.

The tornadoes broke three utility poles and downed power lines on CR 215 and along Highway 30, causing power outages for about 1,500 homes.