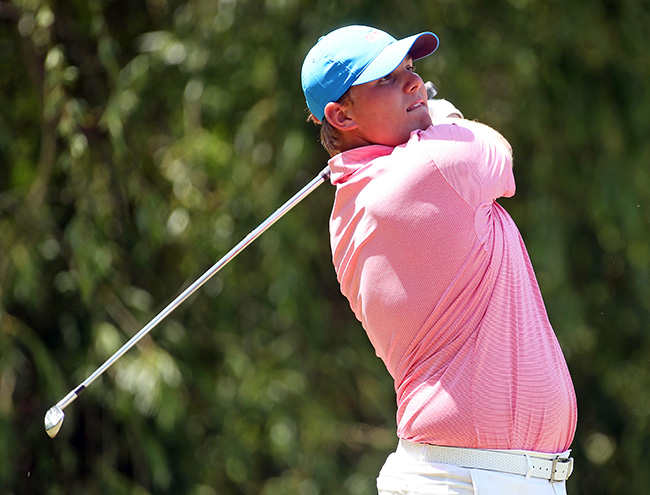 All eyes will be on Braden Thornberry this week and it does not seem to bother him one bit.

The reigning NCAA Champion is making his Web.com Tour debut at this week’s inaugural North Mississippi Classic being held at the Country Club of Oxford. It will be his third time playing in a tournament put on by the PGA. Thornberry made his PGA Tour debut last June at the FedEx St. Jude Classic in Memphis. He also played in the Greenbrier Classic in July.

That is why this week, which started with Thornberry winning the Old Waverly Collegiate in West Point on Tuesday, is no sweat for the Ole Miss junior.

“It’s a lot of golf,” Thornberry said. “I was going to be playing golf anyway so it might as well be out here in competition and getting more reps. …It’s going to be really cool. It’s kind of weird to look around and see some pros playing on the range that we do to warm up every day. I’m looking forward to it.”

Over the past year Thornberry has helped bring the Ole Miss golf program into the national spotlight. Winning the 2017 Individual NCAA Championship last May, finishing tied for fourth at St. Jude and racking up four wins already this season.

Collegiate golf is a team sport, but there is no question the man his teammates affectionately refer to as ‘Teddy’ is the standout. With that comes what is happening this week. Oxford is hosting its first professional sporting event and Thornberry has become a key part in generating local buzz.

That buzz is also having a trickle down effect onto the Rebels’ men’s golf team and its recruiting. With the Rebels beginning to turn their program into a consistent winner coach Chris Malloy is finding recruits are starting to call him instead of the other way around.

“We’re getting a lot more doors open than we ever have before,” Malloy said. “It’s almost the perfect storm. We’re about to do an over six million dollar renovation at our practice facility, so that’s a huge thing. To time it with Braden doing what he’s done and his success it’s the perfect time. Even though we’re starting to see some end roads that maybe we hadn’t had before. We recruit so far in advance I really think you’re going to see all this success really pan out and be tangible a few years down the road.”

Ole Miss concluded its regular season in West Point this week at Old Waverly and move their focus to the SEC Championships next weekend in Sea Island, Georgia. This was a scheduled off weekend for the Rebels but Thornberry wanted to play with the pros one more time. He wanted to get that taste of professional competition once again.

“There’s no negatives from this week,” Thornberry said. “If I play bad it’s going to be a neat experience. If I play well obviously it will be fun to get into contention. I’m not super concerned with how I play and just have a good time.”

The first and second round pairings will help Thornberry get comfortable quickly. Former Rebel Ben Wolcott played his way into this week’s field after earning one of the 12 qualifier spots on Monday in Tunica. Wolcott and Thornberry will play together on Thursday and Friday.

Friday’s tee time is at 8:52 a.m. The Ole Miss pair will already have plenty of support on the course, but it may cause some classrooms to be empty.

“I hope so. That’s what we want to do,” Thornberry said laughing. “We will have the biggest following out there I’d have to think. So, that will be pretty cool. I’m looking forward to it.”