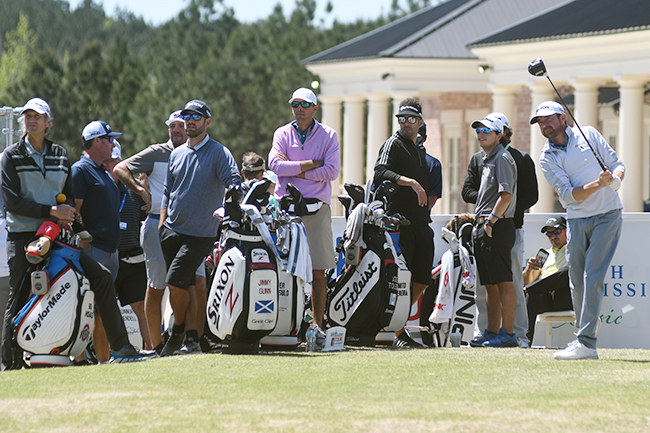 Golfer Jimmy Gunn, right, watches his tee shot off the first tee as golfers participating in the North Mississippi Classic get in a practice round at the Country Club of Oxford, in Oxford, Miss. on Tuesday, April 17, 2018.

With large crowds expected to attend the North Mississippi Classic, a Web.com Tour event from the PGA starting on Thursday at the Country Club of Oxford, residents in the normally-quiet subdivision are bracing for the impact.
On Tuesday, the Oxford Board of Aldermen heard a request from Chip Wade, president of the Grand Oaks Homeowners Association to allow the development to close entrances to the “old” section of Grand Oaks for the safety of the homeowners, spectators and golf tournament participants.
Wade said the HOA would be hiring security guards to stand guard at the entrances and wanted to provide passes for homeowners, their guests and service providers.
However, the aldermen had concerns about closing access to public roads and the logistics of being able to provide everyone with passes in time for the tournament.
Aldermen Janice Antonow suggested that instead of closing or limiting access, that the HOA have guards act more like greeters, who would provide information about where people can or cannot park and inform the public that they cannot walk on private property to get to the event.
The tournament is providing shuttles from Oxford High School and the Oxford School District where people can park and ride over to the tournament to reduce the amount of cars parking on the street inside the subdivision.
The aldermen agreed, 6 to 1, to allow the security guards to guide traffic into the subdivision, but reminded Wade they cannot stop people from driving on the public roads. Aldermen Ulysses Howell was the dissenting vote. He said he did not think the HOA had a right to inquire people as to why they are wanting to drive into the subdivision since it’s a public road.
The board did approve a request from the County Club to put out cones on the roads next to the club to guide pedestrians and to put up security checks to check for parking passes at the clubhouse.
The tournament kicks off Thursday.