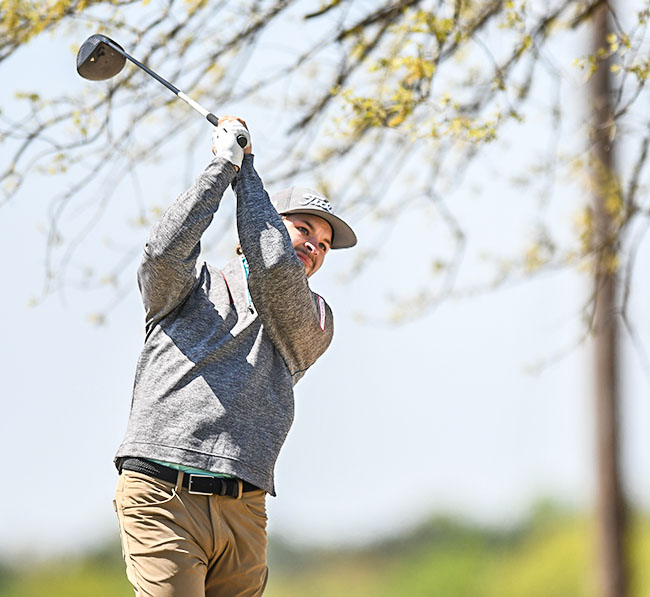 Conner Godsey hits an tee shot on the 7th hole during the opening round of the North Mississippi Classic at the Country Club of Oxford, in Oxford, Miss. on Thursday, April 19, 2018.

It was appropriate Braden Thornberry was wearing a Memphis Grizzlies pullover on Thursday. His opening round in the North Mississippi Classic took a lot of grit as he grinded to stay within contention.

The Ole Miss junior shot a 3-over 75 at the Country Club of Oxford, putting him eight shots behind the leaders. It was a round that had plenty of ups and downs.

After an opening par on the Par-5 first hole, the next 17 holes saw Thornberry record two triple bogeys and a double bogey along with five birdies.

“I was playing pretty good and just here and there I would have a bad swing that would cost me two or three shots,” Thornberry said. “I kept myself in it and a good round (Friday), make the cut and try to move up.”

The two triple bogeys — which Thornberry noted may have been the first round he’s had more than one —  came on hole Nos. 2 and 12 with the double occuring on the Par-4 7th after a birdie on No. 6.

The driver was giving Thornberry the most trouble with tees shots going out of bounds and causing the high scores on the three holes.

The iron and short game kept him from shooting himself out of the tournament on the first day and helped create scoring opportunities.

“I was coming behind all day and kind of grinding my way back and then I’d do it to myself again,” Thornberry said. “Every hole had trouble left and right and I wasn’t super sharp off the tee. There was no problem with my game. It was just a couple shots that kind of came out the way they did.”

Thornberry trails Connor Godsey and Colombia’s Sebastian Munoz, who both shot opening round 67s to lead at 5-under. He will begin his second round on Friday at 8:52 a.m. and start on the 10th tee.

Godsey was one of the first people out during the morning wave and went out with a 4-under through his first 9 holes. He finished with one birdie on his inward nine.

“I played well. All parts of my game are pretty solid,” Godsey said. “I hit it pretty well and made some good putts. Overall it was just a good, solid round of golf.”

Behind Godsey and Munoz is Roland Thatcher at 4-under and a pack of players at 3-under. Only 36 players scored under par.

Other notables include the most recent winner on the Web.com Tour, Sam Burns, who closed with five birdies his final nine holes to finish at 1-under. Burns started his round with a double and triple bogey in his first three holes.

Former Mississippi State player Chad Ramey finished at even par after getting it to 2-under at one point during his round. The Fulton native is still fully in contention.

“I got off to a slow start, which it was kind of cold and windy this morning,” Ramey said. “I just kind of let a few holes get away from me on the way back in.”

Playing with Thornberry was former Ole Miss Rebel Ben Wolcott, who played his way into the tournament by winning a qualifier in Tunica on Monday. Wolcott struggled and shot an opening round 79 for a 7-over start.

The first round was suspended due to darkness with two groups still on the front nine with a few holes left to play.