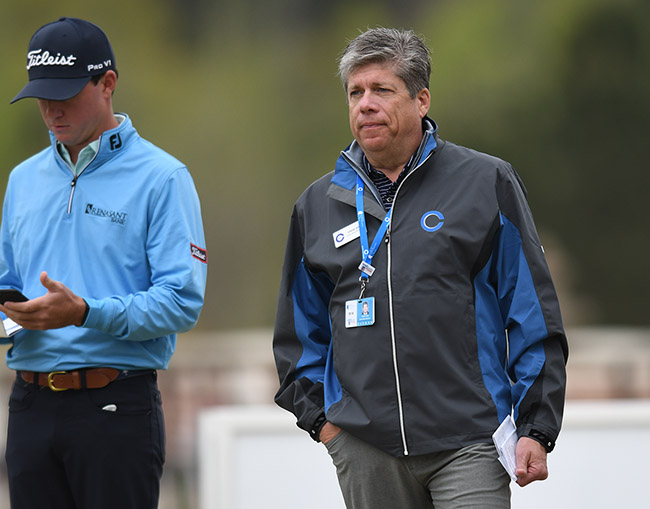 Steve Jent waits to announce a group teeing off at the Manning Pro-Am at the North Mississippi Classic at the Country Club of Oxford, in Oxford, Miss. on Wednesday, April 18, 2018.

Nearly every PGA Tour, Web.com Tour and Champions Tour event is hosted by a community nonprofit organization. Organizers of the North Mississippi Classic have been working with Jackson-based Century Club Charities to host this weekend’s tournament at the Country Club of Oxford. Century Club Charities also runs the Sanderson Farms Championship PGA Tour event in Jackson and works with about 35 charities across the state.

Steve Jent, executive director of Century Club Charities, said the tournament came about due to the organization’s willingness to branch out into North Mississippi.

“We’ve done really well in Jackson, but we looked at the state and said, ‘We’re not really getting the northern part of the state involved yet,’” Jent said. “Oxford made a lot of sense. It’s centrally located, it has the hotels and transportation system, it’s close to airports. It’s become a destination city.”

Over the past 20 years, golf tournaments hosted by Century Club Charities have raised more than $14 million for Batson Children’s Hospital, donations that have gone to the hospital’s heart center and neonatal intensive care unit. The hospital is currently undergoing a $100 million expansion, so proceeds from this weekend’s tournament will go towards covering that cost.

Jent said the simplest way for people to get involved and contribute to the charity is by attending the tournament and buying concessions. Local businesses have also joined in on the action, purchasing sponsorships and providing hospitality tents and catering.

So far, he said, the turnout has been favorable, especially during this week’s Manning Pro-Am. Jent also added that the benefits of the tournament are twofold, from both charitable and economic standpoints. Visitors this weekend are expected to generate nearly $3 million in revenue at local businesses. However, there is still work to be done, Jent said.

“What I want the community to know is that we need help in return. Going forward, we’re going to need more volunteers,” he said. “We’re going to need more sponsors to jump in and help us by sponsoring pro-am teams and host customers and clients in hospitality. At the end of the day, if you can’t do those things, all you need to do is come out and watch the golf.”

Supporting local businesses is one of the Web.com Tour’s missions as well. Mike Young, Director of Financial Planning and Analysis for Web.com, said through sponsoring the tour, the company hopes to support local markets.

“What attracted us as a company to be the umbrella sponsor was the charitable giving in the local markets,” Young said. “We’re an online marketing company that helps small- to medium-sized businesses. Without their support, none of this would have happened.”

With that in mind, Web.com spent the last two weeks taking votes for their Small Business Championship. During the awards ceremony on Sunday, when the tournament champion will be presented his trophy, Young’s team will present their own prize to the winning local business.

The two finalists are Blue Delta Jeans and Taylor Grocery. The winner will be entered into a pool with other winners from around the country for a chance to win grand prize of $25,000 in free online marketing tools, courtesy of Web.com.

“It’s a nice way for us to give back to the small business, too, because they’re such an important part of these tournaments for us,” Young said. “We want all the small business owners to come out on Sunday for ‘Small Business Sunday,’ because it’s our way of thanking them for their support of the tournament.”

For more information on the North Mississippi Classic, visit http://northmsclassic.com.