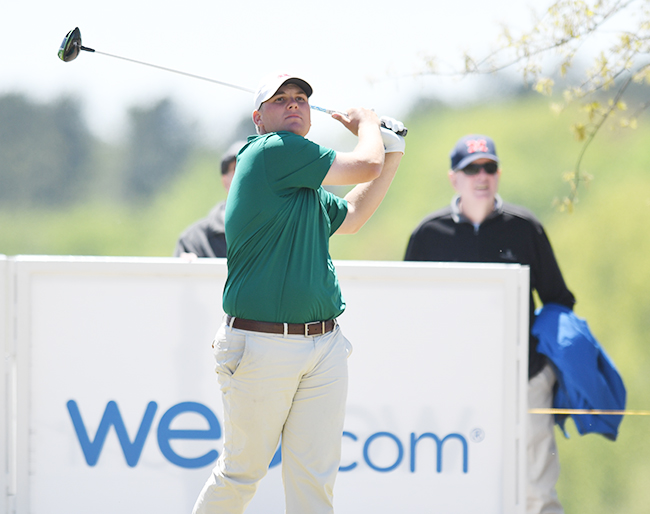 Braden Thornberry tees off on the 7th hole during the second round of the Web.com Tour's North Mississippi Classic at the Country Club of Oxford, in Oxford, Miss. on Friday, April 20, 2018.

After a grind of a first round Braden Thornberry had a little bit easier time around the course on Friday morning. The Ole Miss junior shot a 3-under 69 in his second round of the North Mississippi Classic and did just enough to make the weekend.

The cut line stayed at 1-over most of the day but shifted to even par — where Thornberry finished his day — after the afternoon wave finished their rounds.

It is his third made cut out of four events played on the PGA circuit.

“I didn’t feel bad yesterday,” Thornberry said. “People probably thought I was spraying (shots) yesterday. I hit it good other than a couple swings. I’m feeling pretty good. If I can just get a few more putts to fall.”

Thornberry shot a 3-over 75 opening round but had two triple bogies and a double mixed in with five birdies. On Friday he made five birdies and two bogies. The low round could have been lower if some putts that burned the edge of the cup had fallen down.

The lead sat around 7-under all day but a late afternoon charge by South Korea’s Kyoung-Hoon Lee, who closed his round with four straight birdies, pushed it to 9-under. Eric Axley sits in second at 8-under, while Australia’s Cameron Davis is in solo third at 7-under. Davis used a 4-under 68 to shoot up a leaderboard that saw little movement most the day.

“I’ve just played really well,” Davis said. “It’s a tricky course, and with the swirling winds and tricky greens, you just have to hit solid shots to where you’re aiming and make sure you’re on the right levels. I’ve done a pretty good job of that so far.”

With a nine-shot deficit heading into Saturday Thornberry has a chance to post a solid finish heading into next week’s SEC Championships in Sea Island, Georgia. Now that he has reached the weekend, the NCAA champion wants to see if he can make a run at the inaugural tournament’s title.

“Kind of what I did today, go out there and shoot three under and you’ll move up a lot. If I can go lower than that it’d be great,” Thornberry said of his Saturday strategy. “I’d like to be within five of the lead going into the final round to really have a chance.”