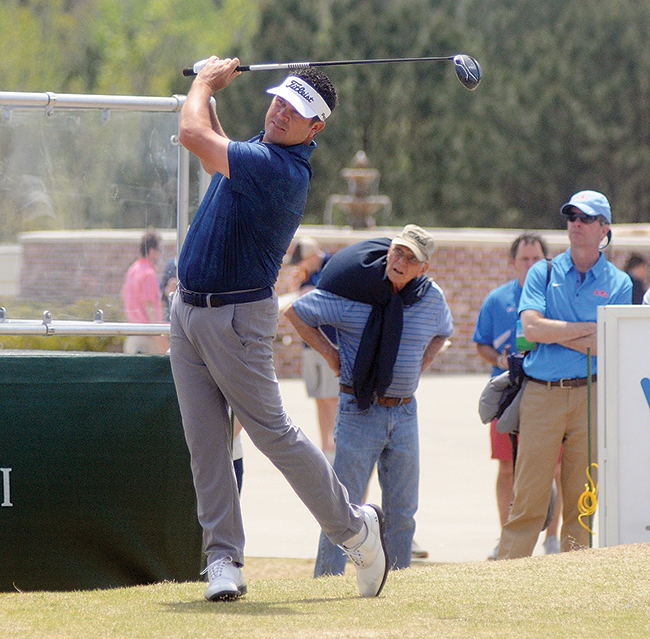 Eric Axley tees off during the third round of the Web.com Tour's North Mississippi Classic in Oxford, Miss. on Saturday, April 21, 2018.

There were plenty of low scores in the morning but the afternoon wave had a more difficult time on Saturday.

Eric Axley was one of the few who did and holds a three-shot lead after three rounds of the North Mississippi Classic. Wilcox carded a 4-under 68 to move to 12-under overall after 54 holes.

“We didn’t get in a whole lot of trouble,” Axley said of his round. “Around this course, there are plenty of holes you can birdie. It’s just eliminating some mistakes. I’ve learned when you come to a new course you don’t know what to expect.”

Trailing him is Willy Wilcox and Sebastian Munoz at 9-under and a trio of players at 8-under. There are a total of 33 players are within seven shots of the leads.

Wilcox was apart of the morning wave that had several low rounds. The Birmingham, Alabama native shot a new course record 64 (8-under) to shoot up the leaderboard midday. He carded only one bogey and nine birdies. Six of them came in Wilcox’s first nine holes.

The last time Wilcox set a scoring record in the third round was in 2013 when he shot a 63 and ended up winning the South Georgia Classic. That is his only win on the Web.com Tour.

“I was thinking it had to (be a course record),” Wilcox said after his round. “It was out there. The greens were good and I haven’t putted that well in a while. It was just nice to see short putts go in and I got another good break off a tree. It was a sweet day.”

The 36-hole leader, Kyoung-Hoon Lee shot an even-par 70 on Saturday and is in the group with Wilcox and Munoz at 9-under.

The predicted forecast of heavy rain on Sunday made Saturday have the feel of a final round with players using the mentality that it would be their last trip around the Country Club of Oxford. There is still a plan to have the fourth round with split tee times on Holes 1 and 10 and pairings will be threesomes.

Will Stokes’ relief helps No. 11 Ole Miss even…