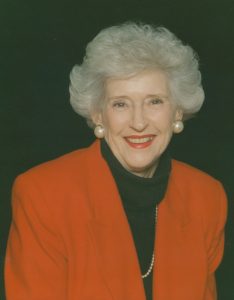 Mildred Louise Starnes Ragland, 94, of Oxford passed away, Thursday, April 19, 2018, after a long life well-lived. The funeral service will be held at 2 p.m. on Monday, April 23, 2018, at First Baptist Church with Rev. Robert Allen and Rev. Don Gann officiating. Burial will follow in Oxford Memorial Cemetery. Visitation will begin at noon prior to the service at the church. Waller Funeral Home is in charge of arrangements.

Mrs. Ragland was born January 27, 1924, in the Toccopola community of Lafayette County. She was the youngest of Baxter and Della Starnes’s six children. She graduated from Toccopola High School and attended Draughon’s Business College in Memphis. She worked in the payroll office of a Memphis construction company before returning home to Oxford.

Mrs. Ragland was hired by First National Bank of Oxford in 1943, where she worked until her retirement in 1992. She began her career in the bank’s “back room,” but her work ethic and common-sense business knowledge led her into management, later becoming the bank’s Executive Vice-President. She was recognized as a banker who treated all customers warmly and fairly — whether it was a student needing a loan or a director wanting assistance — and was respected by all.

For years after her retirement, former customers she encountered around town would thank her and gratefully recall her assistance and expertise. She continued to utilize her banking experience after retirement, faithfully reconciling her statement to the penny every month.

A person of strong faith, she attended First Baptist Church of Oxford, where she was a long-time member of the Friendship Sunday School Class and served as church treasurer and member of the finance committee.

Known for her outgoing personality, sharp financial mind and stylish appearance, Mrs. Ragland loved visiting with family and friends and was known for her strong opinions – which she would gladly share.

A strong believer in community involvement, through the years she served as a member and later Worthy Matron of the Eastern Star, the Pilot Club, the VFW Ladies Auxiliary, the Business and Professional Women’s Club, the Oxford Chamber of Commerce, the United Way, the Oxford Garden Club, and the secretary of Baptist Memorial Hospital-North Mississippi’s Advisory Council.

Mrs. Ragland was also involved in her family’s activities, founding the Parents’ Clubs of her children’s college fraternity and sorority, and serving as treasurer of the North Mississippi Chapter of the Ex-Prisoners of War, of which her husband was a member.

Her children’s friends at Ole Miss will best remember her as an excellent cook who joyfully and graciously welcomed them to a delicious home-cooked meal, an offer that was never refused. She was renowned for her often-replicated-but-never-duplicated mashed potatoes.

Mrs. Ragland was preceded in death by her husband James Leenard Ragland, whom she met shortly after he returned home from World War II and married in 1948. He passed way in 1997. Also preceding her in death were her parents and five siblings: brothers Cleveland Starnes and Milton Starnes and sisters Lottie Threlkeld, Hattie York and Lucille Daniels.

She is survived by her children, Teresa Llewellyn of Gaithersburg, Maryland, and Lee Ragland (Jana) of Madison, Mississippi. “Nana” is survived by grandsons Jeb Llewellyn (Amy) of Martinsburg, West Virginia, and Travis Llewellyn (Ashley) of New Orleans, and granddaughters Emily Ragland of Memphis, and Elaine Ragland of New York City, and one great-grandson, Griffin Llewellyn. She is also survived by sisters-in-law, Gladys Starnes and Hazel Ragland, numerous nieces, nephews and many dear friends.

The family would like to thank Rosie Hawkins for the steadfast care she lovingly provided during the past few years.

Memorials can be made to the First Baptist Church of Oxford, 800 Van Buren Ave., Oxford, MS 38655 in the name of Louise Ragland.

For further information or to sign an online guest book, you may visit www.wallerfuneralhome.com.