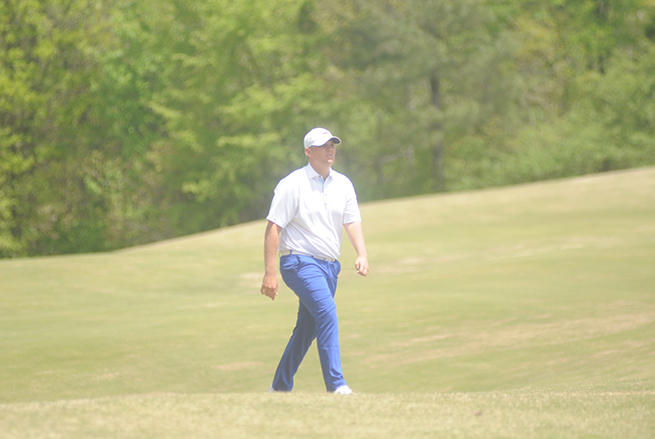 Low rounds were there to be had on Saturday and Braden Thornberry nearly had one of them. If a few more putts would have fallen the Ole Miss junior could have seen his name near the top of the North Mississippi Classic.

Instead Thornberry shot 3-under for another 69 in his third round at the Country Club of Oxford. It has him currently inside the Top-30 with a shot to make a run in the final round, weather permitting, on Sunday for Top-20 or better.

“I gave myself a lot of looks today. I think the course was playing maybe a little bit easier,” Thornberry said. “I hit it good enough to score better than I did.”

For the third straight round Thornberry carded five birdies but a mix of two bogies kept him from going lower. He also missed a handful of putts within 10 feet that could have helped his round as well.

Thornberry hit 16 greens on Saturday and has missed only nine greens through 54 holes. After hitting 10 of 14 fairways the first two rounds Thornberry only found eight fairways off the tee box on Saturday.

“I’m playing good but I just have to make those 15-footers,” Thornberry said. “I’m happy with the way I’m playing.”

The round looks to be promising early. After three straight pars to start his day Thornberry birdied the Par-5 fourth and the Par-3 fifth. He followed up with a birdie on No. 8 to make the turn at 3-under. A missed putt of about six feet on No. 6 kept him from making three consecutive birdies on the front nine.

With a 75 in Thursday’s opening round Thornberry has shot six under the next two days to not only make the weekend but put himself with a chance for a high finish in Oxford’s first professional sporting event.

“Playing as an amateur it maybe means a little more than it does to some guys,” Thornberry said. “Even though I’m am playing it as an amateur I’m kind of the hometown kid and you don’t want to quit on the home crowd.”

The status of Sunday’s final round is still up in the air with inclement weather scheduled to roll into the area late Saturday night and stay most of the day Sunday.

How an act of ‘human kindness’ helped a caddie…