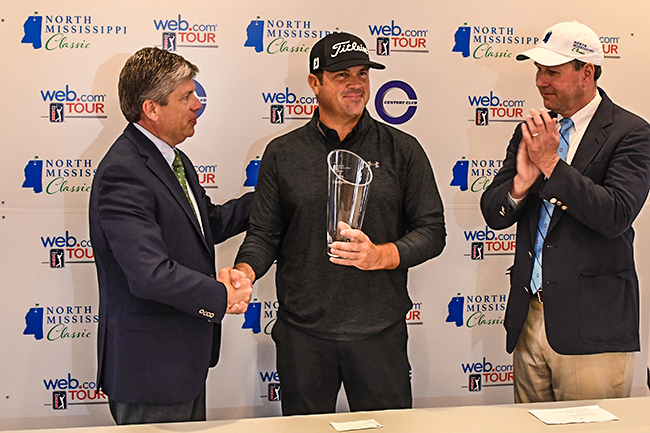 Eric Axley, center, is presented the trophy by Steve Jent, left, as Jeff Hubbard applauds after winning the Web.com Tour's inaugural North Mississippi Classic at the Country Club of Oxford, in Oxford, Miss. on Sunday, April 22, 2018. Rain cancelled the 4th round with golfers already on the course, with Axley declared the winner since he was leading after three rounds.

On Saturday players were treating the third round like it could be their last of the week. Eric Axley was doing the same, but also trying to ensure himself of a pretty nice birthday present.

Mother Nature made sure that happened.

On Axley’s 44th birthday the journeyman golfer was named the winner of the inaugural North Mississippi Classic, which was shortened to 54-holes due to rain on Sunday. It is the Knoxville, Tennesse native’s second win on the Web.com Tour and his first in 13 years.

Axley’s previous win was in the 2005 Rex Hospital Open. He has also won on the PGA Tour, taking home the 2006 Valero Texas Open title.

“It feels good. It’s been awhile since I’ve won on this level,” Axley said. “We looked at the forecast and they moved the tee times up and they do that for a reason. We kind of felt there was a chance we might not play today so our goal (Saturday) was to play like it was the final round and we went out and played well.”

Oxford’s first professional sporting event was shortened to a 54-hole tournament due to rain that rolled into the area Saturday night and never let up.

Tournament officials tried to get the final round with the players going out in threesomes and in split tees. Three hours of play took place before play was suspended around 10:30 a.m. and then the tournament was made final after a four-hour delay.

“For a first year event we couldn’t have asked for a better week,” tournament director Steve Jent said. “It’s an outdoor sport so you kind of take what you get with the weather. It allowed us to have the length of competition that could be for it to be official. We tried, and I know the web.com tour tried, it just didn’t look like the rain was going to cooperate.”

Axley shot a four-under 68 on Saturday to take a three-shot lead into Sunday’s final round. He won with a 12-under overall score.

The fortunate news for Axley was unfortunate to the 36-hole leader Kyoung-Hoon Lee. While play was underway Sunday morning Lee had tied Axley at 11-under before play was halted.

Axley, who has spent time going between both the Web.com and PGA Tours, was making his tournament selections on a financial basis. Now that he has secured himself a winner’s check of nearly $100,000 that thought process can be altered a bit.

“It will probably be more golf course related versus just playing on the tour,” Axley said. “Being in this position I’ll probably just stick more (on the Web.com Tour) unless it’s just a course (on the PGA Tour) that I really love or stuff like that.”

Braden Thornberry made it through seven holes of his final round and had a 1-under day going before play ended. With the tournament reverting back to Saturday’s leaderboard the Ole Miss junior earned another Top-25 finish in a PGA event.

Placing tied for 22nd in this week’s event qualified him for next week’s United Leasing & Finance Championship in Newburgh, Indiana. Thornberry will not be participating in his second straight Web.com Tour event as he will be with his Rebel teammates at the SEC Championships in Sea Island, Georgia.

No. 11 Ole Miss finishes doubleheader sweep of No.…