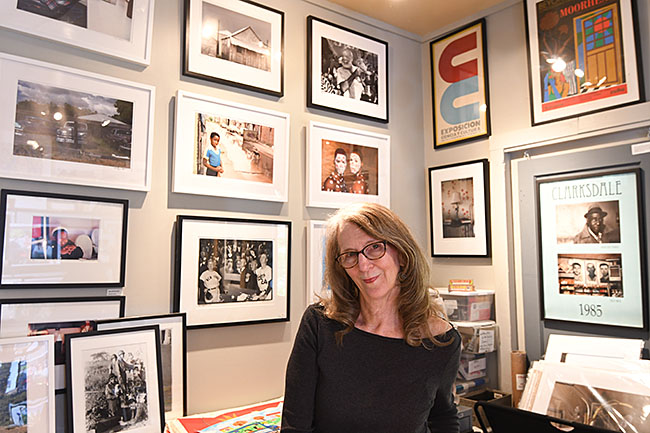 Oxford photographer Milly West has made a career out of capturing images of everyday life in unique ways.

A graduate of the University of Mississippi journalism program, West divides her time between three locales – Arkansas, the Mississippi Delta and Cuba. Her love of these places, she said, stems from unlikely similarities and fond memories.

West grew up in Greenwood, Miss. and Oxford, and first started shooting photos in Clarksdale, Miss. in 1982. At the time, she said, the town dynamic was something she found captivating.

“There was something about the lifestyle, the divided community – I was drawn to the black community, the figures like Aaron Henry, who suffered during the Civil Rights Movement but still kept the faith,” West said. “The black community, when I started shooting in Clarksdale, I would say it was self-sufficient. You had your grocery stores, a movie theatre at the time, three or four funeral homes, eight or 10 churches, drugstores, cafes, churches, all black-owned.”

West’s yearly Cuba trips began in 1996 after a conversation with her friend Bill Dunlap. West, who owned Southside Gallery at the time, mentioned her desire to travel to the island nation to purchase art for herself and patrons of the gallery. Dunlap flipped through a notepad for a few seconds before giving her the phone number of Olga Hirshhorn, of the renowned Hirshhorn Gallery.

Hirshhorn, who traveled with the Center for Cuban Studies in New York, helped her secure the appropriate paperwork, and West fulfilled her dream in January of that year. While in Cuba, she said she began to see similarities between people in the Delta and Cubans, and learned lessons she’s carried with her throughout her life.

“When I went to Cuba, I found a lot of that same resilience and love of community in the people there that I’d found in some of those communities in the Delta,” she said. “I’m not trying to put a smiley face on this and say it was easy, but they still had each other. Even the people who had very little, there’s no hard feelings because everyone has the same amount of nothing. There’s no such thing as a pity party in my house anymore, because if I can’t find joy in the blessings I have then I’m a lost cause.”

West clarified that, in saying the Cubans had “nothing,” she was referring to material goods. They have a rich culture and just enough to get by, but nothing extra.

She now returns every year to get a “Cuba fix,” reconnecting with friends, learning more about the culture and helping up-and-coming artists share their work with the rest of the world.

West’s passion for photography and art collection has led to the publication of several photo books, art exhibitions and, most recently, a spot in the prestigious Arkansas Art Center’s 60th annual Delta Exhibition, which will run from May 25 to August 26. West is one of 46 artists from Arkansas and neighboring states to be featured in the exhibition, and the only artist from Mississippi on the roster.

Her love for Arkansas, specifically Hot Springs and towns dotting the mountains around it, began early in life. As a child, her mother would take West and her brother to Hot Springs on vacation every year, and as an adult, she and her children celebrated a memorable Christmas at the Arlington Hotel overlooking Hot Springs National Park.

Today, she and her husband Rest often travel to Calico Rock, Ark. to visit their friends who own a hotel there. It was during one of those visits that West snapped the photo that will be featured in the Delta Exhibition, “White River Bridge, Calico Rock, Arkansas.” The piece features an old steel bridge juxtaposed against a thick, cloudy fog, shrouding the river and forest below.

“I’d seen the fog before and not gone out, but then by the time I dilly-dallied around, it was too late and the fog would be gone. This time, I just jumped up and went, and it was amazing,” she said. “With this one, it was more about form. It had that line going down slightly at an angle, but then the vision of this hard concrete on one side, with the gravel and all the things that collect on a road, versus the forests that are kind of in the background and subtle because of the heavy fog.”

Surprisingly, West only took one or two photos of the scene. Unsurprisingly, she said, that photo was the only one selected out of four she submitted to the exhibition, because she knows it’s good. Having her camera as a “constant companion” is a practice that paid off in this case.

However, she admits the photo strays from her usual subject matter – not that it’s a bad thing, as she enjoys experimenting.

“Some of my photographs tend to be more about people and the relationship I have with them and things like that,” she said. “But this was more or less my time of solitude, so I think that was the difference. It’s not really what I’m known for, but I think I’m going that way now.”

To learn more about Milly West or to see samples of her work, visit www.millywestart.com.