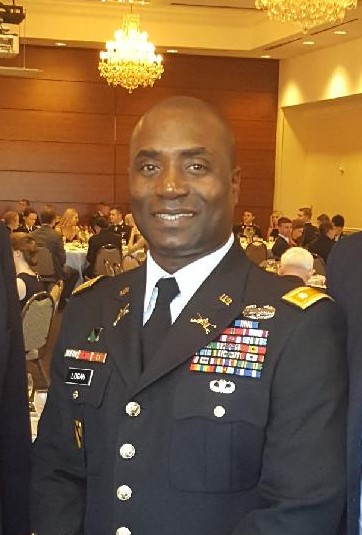 While a football player at the University of Mississippi, running back Dameion Logan made Ole Miss Rebels fans proud and helped the Rebels reach two Liberty Bowls and a Gator Bowl between 1989 and 1993.

However, since graduation, he has made his county proud by serving in the U.S. Army for more than 17 years.

“To be inducted while still serving on active duty speaks volumes about his past military accomplishments and his propensity for continued outstanding service to our nation,” Towery said.

Logan, 47, was accepted into Ole Miss on a football scholarship in 1989. His mother, the late Wanda Logan, raised him as a single parent. She served in the U.S. Army as a reserve officer for 10 years.

“She is the biggest reason I wanted to serve,” Logan said. “My only regret is that she couldn’t be there to see my induction. But I know she’s looking down.”

While he enjoyed playing for the Rebels, he used his athletic talents to help provide a college education – one in which he took seriously.

In his junior year, Logan took the oath of service and joined the U.S. Army while in the ROTC program at Ole Miss.

While in the ROTC program, Logan said Towery became his mentor and father figure.

“He’s been a great mentor to me, not only while I was at Ole Miss but even to this day,” Logan said.

He has been deployed overseas several times. His first deployment was to South Korea, where he served as a planner from 1999-2000. He served at Fort Hood in Texas and Fort Leavenworth in Kansas until he was deployed to Iraq in 2006-2007 where he helped train Iraqi soldiers. He returned to the states and worked in U.S. Army Human Resources for two years before being deployed to Afghanistan as a battalion commander from 2012-2013. After returning home, he served as a joint planner for the Joint Enabling Capabilities Command at Naval Station Norfolk in Virginia.

In October 2016, he was assigned as the Senior Army Advisory Guard to the Oklahoma Army National Guard.

However, one of his most prized awards came in 2000 when he received the Soldier’s Medal – the highest honor awarded during peacetime – for saving the life of a little girl in Texas.

“I was sitting and eating breakfast one morning at a restaurant and it was raining hard,” Logan said. “I looked up and saw a culvert that ran next to the restaurant was washed out and two girls were in it, struggling to swim against the current.”

Logan ran outside and saw one of the girls had gone under water, and which was heading under a bridge.

“I ran to the other side of the bridge, and then I saw her pop out,” Logan said. “I jumped in and was able to get a hold of her and swim back over to the side and get her out.”

For all of his accomplishments during his 17-plus years in the U.S. Army – home and abroad, Logan was inducted into the ROTC Hall of Fame during a ceremony at The Inn at Ole Miss Friday.

“As I sat among the cadets, in many ways I felt like I had come full circle in my military career,” Logan told the EAGLE Sunday. “As a cadet, I never imagined that I would return to Ole Miss in any official military capacity, let alone a Hall of Famer, and Friday night, there I was. It was great yet humbling to be among such great contributors not only to our awesome university but also to this great nation that we serve.”

While at the ceremony, he spoke to many of the current ROTC cadets who sat at his table.

“My advice to them was to work hard but have fun,” Logan said. “Never sacrifice your integrity and take care of our nation’s most prized possessions – soldiers.”

The epitome of an officer

Towery called Logan the “epitome of a military officer.”

However, Logan has been more than a former student for Towery, who is a 2006 Army ROTC Hall of Fame Inductee himself, and serves as president of the Ole Miss Army ROTC Alumni Club.

“Dameion has been part of our family since he was a student at Ole Miss and I wore his ‘My Son is No. 35’ button at the Ole Miss football games,” Towery said. “Our kids grew up with him, and he has remained in their lives as well.”

Logan said he will be deploying to Saudi Arabia in about five months and looks to retire from the Army in about three years. He says being inducted into the Hall of Fame has been a humbling experience.

“I’ve just put my head down, worked hard and just did what I’m supposed to do,” he said. “I look at the other inductees over the years whom I hold in such high regard, and I’m not sure I’m in the same caliber. But it’s very humbling, and I’m very appreciative that someone looked at my career and thought I was worthy.”