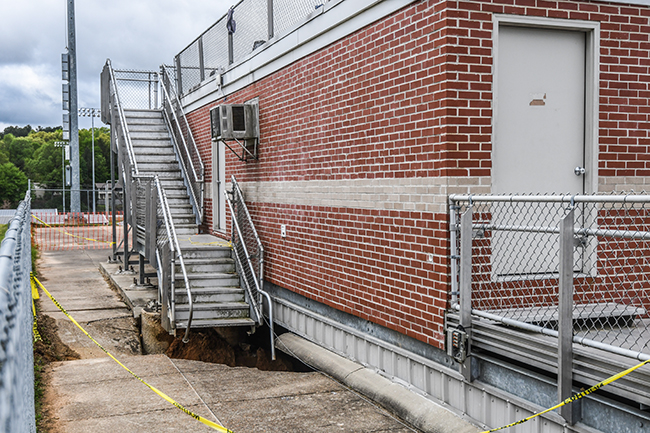 A sinkhole has formed underneath the press box at Oxford High's Bobby Holcomb Field, in Oxford, Miss. on Monday, April 23, 2018.

The heavy rains that have hit Oxford over the winter and spring months finally took their toll.

After one of the many storms rolled through a couple weeks ago a sinkhole was discovered behind the pressbox at Oxford’s Bobby Holcomb Field.

The extent of the damage is not fully known — nor when the sinkhole actually occurred — but the sidewalk on the backside of the pressbox has sunken in and the hole extends to under the back of the pressbox.

Oxford athletic director Mike Martin told the EAGLE there would be an engineer coming out sometime this week to take a look at the hole and to evaluate what steps need to be taken.

The two scenarios are the damage is minimal and a repair can take place, keeping the pressbox intact. The other is the sinkhole has done too much damage to the foundation and the pressbox would have to be torn down and an entirely new pressbox would be constructed.

Oxford was set to host region track meets this past Saturday at Bobby Holcomb Field but they were moved to the Ole Miss Track & Field Complex due to the sinkhole. Bobby Holcomb Field is also scheduled to host a middle school football jamboree next week but that will still go on as planned with fans sitting on the visitor’s sideline.

The 2018 football season begins in less than four months and if a new pressbox must be built that could interrupt some or all home football games, yet that will not be determined until after the area has been evaluated.

The Oxford spring game against Clarksdale that is scheduled for May 11 has always been scheduled to be played at Vaught-Hemingway Stadium on Ole Miss’ campus and was not moved there due to the sinkhole occurring.

The EAGLE will update this story as it develops.