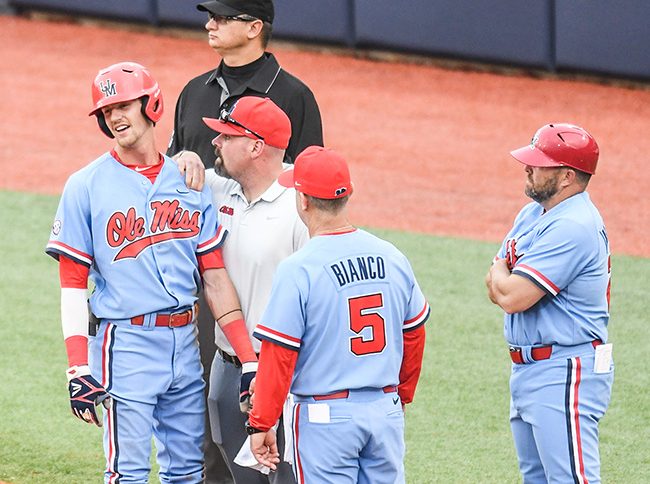 Ole Miss' Ryan Olenek is attended to after injuring his shoulder on a play at first base against Georgia in game 2 of a doubleheader at Oxford-University Stadium in Oxford, Miss. on Saturday, April 21, 2018. (Bruce Newman, Oxford Eagle via AP)

Ole Miss could be without its leading hitter for this weekend’s series against LSU.

Ryan Olenek didn’t play in the Rebels’ loss to Mississippi State on Tuesday after injuring his shoulder in last weekend’s series against Georgia. An MRI taken Tuesday revealed a slight posterior labral tear in the junior outfielder’s non-throwing shoulder, which has his status questionable for No. 6 Ole Miss’ series against the Tigers starting Thursday at Oxford-University Stadium (7 p.m., SEC Network).

“There’s a full spectrum of where do you go from there, but being a non-throwing arm and there’s no other damage to the shoulder, it should just be rehab and strength and then really is he capable of playing? How’s his strength?” Ole Miss coach Mike Bianco said. “From yesterday to today, he’s made gains. We’re hopeful that he has a chance to play this weekend.”

Olenek, who suffered the injury while sliding into first base in an attempt to avoid a tag in the second game of Saturday’s doubleheader, has been one of the SEC’s hottest hitters since league play started in mid-March. A 19-game hitting streak has his average up to .397 — second-highest in the SEC — while he’s hitting an SEC-best .479 in league games.

Olenek has 14 multi-hit games during that span. Should he not be able to go this weekend, that likely means more at-bats for Tim Rowe, who went 3-for-3 with an RBI double filling in for Olenek on Tuesday.

Parker Caracci was bound to come back to earth at some point, but the sophomore right-hander hasn’t gotten nearly the same results on the back end of the Rebels’ bullpen as his workload has increased.

After allowing just two earned runs on 14 hits with 33 strikeouts in his first 15 ⅔ innings this season, Caracci has allowed multiple baserunners in 11 of his last 13 outings and fanned just 13 in his last 13 innings. Often called on to get more than three outs in high-leverage situations, his 28 ⅔ innings are more than any other reliever in his first season on the 35-man roster, but Caracci brushed off any notion that fatigue is playing a part in his recent struggles.

Bianco said he’s not worried about Caracci’s velocity, which is a tick down from the mid-to-high 90s he routinely touched early in the season. Command along with getting used to pitching in high-leverage situations are areas in which Caracci still has work to do, Bianco said.

“We talked a couple weeks ago where we went to (Mississippi) State when he gave up a couple of base hits, he responded differently than he would’ve at the beginning of the year before he became the Parker Caracci nationally,” Bianco said. “His mindset was different. His mindset was just to attack the strike zone and pitch well enough so he could pitch again. But when he kept having success and that snowballed, which is a good thing, there’s a different expectation and pressure. Because we’ve seen him have so much not just success but ultra-success, I think when he doesn’t have success, it’s more magnified.”

LSU is potent offensively — the Tigers’ .289 average is the fifth-highest clip in the SEC — but it’s the rotation where the Tigers look a bit different than past seasons having converted some relievers into starters.

Leading that movement is freshman right-hander Ma’Khail Hilliard (7-3, 3.12 earned run average), who’s settled in as a weekend starter after beginning the season in the bullpen. He’ll get the ball opposite Brady Feigl (7-2, 3.30) in Friday’s game. LSU has yet to decide on a starter for Saturday’s finale, though left-hander Nick Bush, who pitched five shutout innings in just his second start of the season Sunday against South Carolina, is an option.

“I think they’re kind of evolving that way and put some good weeks together,” Bianco said. “It’s the Southeastern Conference. It’s going to be a challenge.”

LSU has yet to win a league road series and has won just twice away from Alex Box Stadium all season. The Tigers were swept at South Carolina last weekend with only one of those games being decided by fewer than seven runs.

Lafayette handles Cleveland Central, advances to 5A North Half