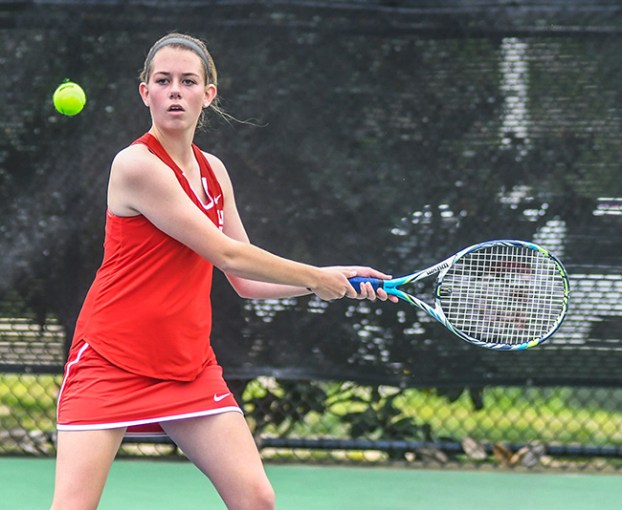 Lafayette handles Cleveland Central, advances to 5A North Half

Lafayette is one win away from doing something never accomplished in program history. Head coach Debbie Swindoll is not shying away from that fact and is putting the pressure on her team.

The Commodores are responding.

Lafayette defeated Cleveland Central in dominant fashion on Wednesday afternoon with a 6-1 win at the John Leslie Tennis Complex. The Commodores advance to their first 5A North Half championship where they will travel to Grenada next week for a bid to their first state championship appearance.

“I’ve said it from day one is I think we’ve got a shot at winning it this year,” Swindoll said. “I put it out there and I hope it’s the right thing to do because my thought is if I don’t believe then I don’t know if they’ll believe.”

The afternoon got started with a win by Ally Bowen in the girls’ singles match with a 6-0, 6-0 victory over the Wolves’ Erin Oaks. Nearly the same time as Bowen’s win the No. 2 boy’s doubles match with the team of Barrett Childress and Nate Leary finished with the Commodore team winning 6-0, 6-0 for an early 2-0 lead in the match.

Bowen is searching for another individual state title and is one part of what is becoming a dominant singles combination with boy’s player Manuel Lopez-Wolff. Wolff won his match over Ivan Bacani 6-2, 6-3.

“We feel really good about (our singles),” Swindoll said. “It’s nice going in to a match when you know you’ve got both singles.”

The No. 1 boy’s doubles team of Dawson Welch and Foster Roush won 6-3, 6-0 over Hardy Cooke and Logan Korb.

It was a clean sweep for the girl’s doubles matches. The No.1 team of Emma Wilson and Halle Moore defeated Caiden Craddock and Victoria Meyers 6-1, 6-1. Sara G. Moore and Lucy Wilson won their match without dropping a point for a 6-0, 6-0 win.

“We’ve been really focusing,” Swindoll said. “This was definitely a good win. Maybe a little better than I thought we were. I felt like we could win but I didn’t feel it would be as dominant as we’ve performed. I just hope we continue the task.”

The previous three north half appearances have been in Class 4A and against the juggernaut New Albany, a region opponent. This season it is not against New Albany but it is a Region 2-5A opponent in Grenanda. The Commodores defeated Grenada already this season, giving Swindoll confidence but it still requires some strategy when setting a lineup.

“It’ll be a tough environment down there,” Swindoll said. “We’ve got to come out ready. A lot of external things going on and we’ve got to stay inside the court. …(New Albany’s) depth was so great I was just trying to do anything I could to win some matches. I’ve got a little more maneuverability because we beat (Grenada) before.”

More than two months have passed since Ole Miss officially appealed the ruling from the NCAA’s Committee on Infractions in... read more