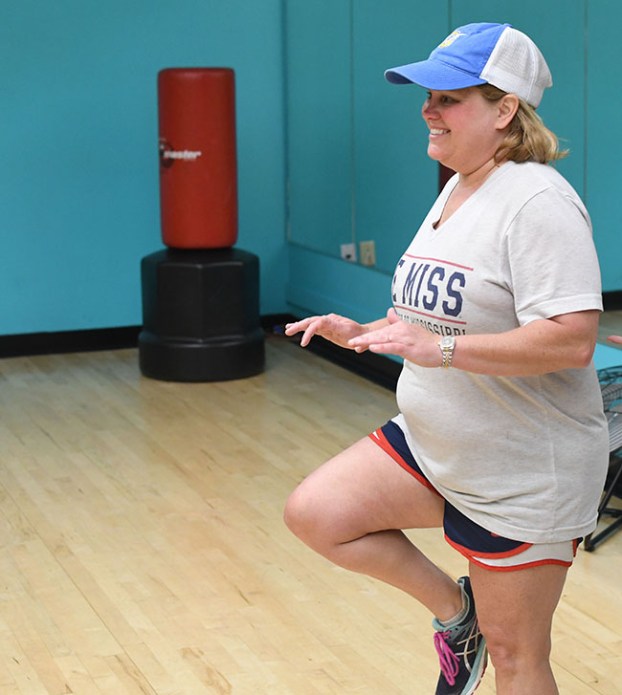 The Oxford YMCA is doing its part to help those with Parkinson’s disease and other mobility related issues.

April is Parkinson’s Awareness Month, and the Strength, Stretch, Balance, Cardio and Fun class was designed to help hinder the symptoms that come with a Parkinson’s diagnosis. Certified Parkinson’s trainer Corey Martin said she got the idea after she started working with Rhonda Rousseau, who was diagnosed with early onset Parkinson’s in 2011.

Martin said she was inspired by Rousseau’s progress, and after learning there was a need for a combination fitness class-support group in the community, starting the program was a no-brainer. One of the challenges the group faces is accommodating participants with varying degrees of mobility.

“The class is not one-size-fits-all. That’s the good thing about this class, that I’m excited about,” Martin said. “When I came in, I really didn’t know what to expect, so I had people in chairs that couldn’t get up. I had one guy with a walker. I had some who were ready to go to work. It’s a wide variety.”

Parkinson’s disease is a neurodegenerative disorder that mainly affects dopamine-producing neurons in a specific area of the brain called substantia nigra. The disease affects 1 million people in the U.S., and 10 million worldwide. Symptoms develop slowly over a number of years, and can include hand tremors, limb rigidity and gait and balance problems. Numerous studies have shown that exercising is the best way to stave off the effects of the disease and slow down its progression.

While many participants do have some form of Parkinson’s disease, there are others who come with their spouses, have neurological issues that impede their movement or simply feel they can benefit from what the class offers.

The Strength, Stretch, Balance, Cardio and Fun class meets once a week, and participants do activities including aerobics, boxing and yoga. They also spend a portion of class time listening to guest speakers or simply discussing the issues they’re facing together.

Making sure everyone is having fun, regardless of their abilities, is one thing the YMCA’s Board Chair Hope Sneed said is the organization’s utmost priority.

“One reason why Corey is so great at this is, she’s designed the class in a way in which everybody succeeds,” Sneed said. “You don’t want to be a part of something where you’re so challenged that you’re disappointed with your progress, and so that’s not what this is about.”

Rhonda Rousseau, the group’s youngest member and one of Martin’s clients, said the group is something she’d been asking for for awhile. After some research, she said she and Martin put their heads together to come up with the best approach for the class.

Since her initial diagnosis seven years ago, Rousseau said her gait has decreased, as well as her balance. However, she admits she has seen significant improvement since she started working with Martin, and hopes to see the same improvements in others as the class progresses.

Bringing in outside resources, from physical therapists to counselors, is something both Rousseau and Martin said they look forward to with the class. Providing information, or simply a voice of encouragement, can make a real difference.

Rousseau describes the class as a “true support group,” where she and other participants can meet and discuss their shared experiences, as well as understand symptoms they might not have experienced yet. It also encourages them to socialize outside of the group, something she said helps lay a foundation for others.

“It was about three, four years ago, I got a bad diagnosis, because I wasn’t working out. I was letting Parkinson’s own me, instead of me owning my Parkinson’s,” she said. “With the help of Corey and the YMCA, I’m in the best shape I’ve been in since my diagnosis. We are warriors against those slowing us down.”

The Strength, Stretch, Balance, Cardio and Fun class meets every Tuesday at 10:35 a.m. at the YMCA on North Lamar Boulevard. It is free to members. Information on membership prices and the YMCA’s full range of programs is available at http://ymcamemphis.org/find-a-y/oxford-ymca.

While about 300,000 people hold paid hunting licenses in Mississippi, most are older adults, according to the Mississippi Department of... read more