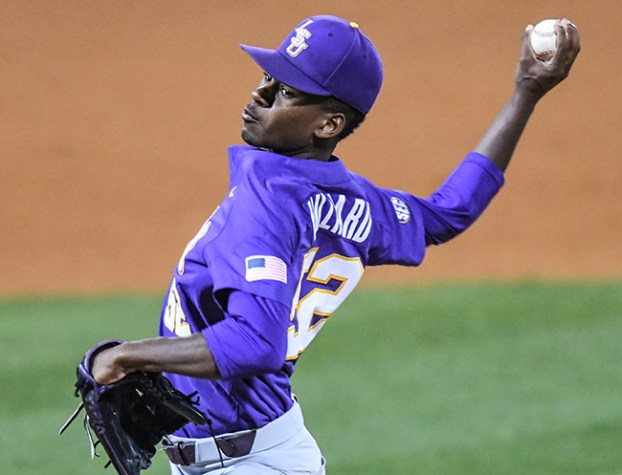 Three batters in, it looked like Ole Miss might carry over the momentum from a 14-run, 15-hit night 24 hours earlier against LSU freshman Ma’Khail Hilliard.

Instead, Hilliard exhibited the composure of a veteran in showing why he’s been one of the top newcomers in the SEC this season.

Hilliard stymied the league’s second-best offense Friday, allowing just one hit in his final six innings to help send LSU to a series-evening 5-2 win at Oxford University Stadium. No. 6 Ole Miss, which fell a half-game back of the top spot in the Western Division standings after Arkansas’ win over Alabama, will try to take the series in Saturday’s 3 p.m. rubber match.

“Taking fastballs or swinging and missing big-time at the breaking ball,” Ole Miss coach Mike Bianco said. “He’s got a good breaking ball and he can make you do that, but I thought we didn’t put enough pressure on him. But you’ve got to credit him.”

Ole Miss had three hits in the first, the latter an RBI single from Nick Fortes to give the Rebels a 1-0 lead, but a single from Tim Rowe and Fortes’ solo home run in the eighth were the only other hits for the Rebels, who came in hitting .304 as a team.

Hilliard (8-3) settled in after Ole Miss’ quick start, looking more like the pitcher that allowed just nine earned runs in his first six starts after being moved into the rotation in early March and less like the one that yielded nearly that many (eight) in just 2 ⅔ innings against South Carolina in his previous start.

Rowe’s second-inning knock was the only other hit Ole Miss had over the next six innings against the 6-foot, 156-pound Hilliard in his longest outing of the season. Mixing his biting breaking ball with a high-80s fastball, Hilliard struck out six and walked three to lower his earned run average to 2.89. Two of those walks got in scoring position, but Ole Miss went just 1-for-7 in those situations.

“He threw both his fastball and curveball for a strike, and that’s two plus pitches you’ve got to look for up there at the plate,” Fortes said. “That makes it tough on an offense whenever he’s doing that.”

Still, the Rebels’ lead held through the middle innings thanks to what Bianco called the best outing this season from Brady Feigl, who blanked LSU for five innings and was a strike away from stranding a pair of baserunners in the sixth before Hunter Feduccia slapped a two-run double to left-center to give LSU the lead.

Feigl (7-3) scattered six hits, walked one and struck out nine before exiting after retiring the first two batters in the seventh for his longest outing since going seven complete against Eastern Illinois on March 9.

“It’s a shame when you have your best outing and you don’t win, but good offense in one inning,” Bianco said. “I thought in that inning that Brady gave up two runs, I thought he really delivered a lot of pitches. They just had some really good at-bats, and that’s how you win these types of ball games.”

Will Stokes came on and walked the first batter he faced before Antoine Duplantis tripled for one of his three hits to increase the Tigers’ lead. Stokes retired just one of the five batters he faced and allowed three runs as LSU built a 5-1 lead before Fortes ended the Rebels’ string of five straight hitless innings with a homer into the left-field bullpen off Nick Bush, who struck out two of the four batters he faced in the ninth.

“Just wash it and stick to our approach,” Fortes said. “We’ve been good all year, so you can’t really stray from it because it’ll work some days and some days it won’t. Today (Hilliard) just got the better of us.”

Breeland Speaks is the first Ole Miss player off the board. The Kansas City Chiefs made Speaks the 46th overall... read more