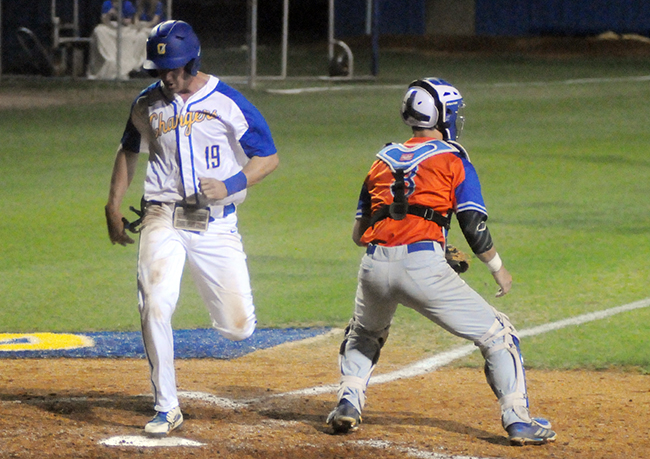 Oxford High vs. Southaven in MHSAA Class 6A playoffs at Edwin Moak Field in Oxford, Miss. on Friday, April 27, 2018.

SOUTHAVEN — With a gutsy outing by Tyler Smith and power at the plate the Chargers defeated Southaven 9-6 at Southaven High School on Saturday night.

Smith pitched six-plus innings, giving up five runs off six hits and struck out five Southaven batters. He faced one batter in the seventh but after 115 pitches Oxford coach Chris Baughman brought in sophomore Eli Wicker to close out the game.

“I shouldn’t have put him back out there in the seventh but (Smith) wanted one more,” Baughman said. “That shows you how good Parker (Stinnett) was (on Friday) because I thought Tyler was really good. (Southaven) can swing it …very proud of Eli Wicker. It’s a tough role to be in as a sophomore but Hays (Roth) has done a great job with it all ear and Eli came in tonight and did a great job.”

One of the biggest at-bats came from shortstop Drew Bianco. The senior shortstop hit a two-run home run in the top of the fourth inning to give Oxford the lead for good. Bianco finished the night 1-for-2 with three runs, two RBIs, two walks and was hit by a pitch.

Clark Stovall went 3-for-5 with an RBI and a run scored.

“We barreled a lot of balls up early,” Baughman said. “(Southaven) made a lot of plays early. I thought the top of our order really, really carried us.”

Now the former kings of Class 5A baseball will face 6A favorite Madison Central in next week’s third round series beginning Thursday.

Parker Stinnett got the start for Oxford and pitched a complete game. Stinnett gave up two runs — one earned — off three hits. He walked two and struck out 12 Southaven batters.

Stinnett worked around trouble all night but Southaven (22-6) managed to push a run across in the third inning to tie the game at 1-all and then another run in the sixth to tie it up once again.

“(Stinnett) executed the game plan,” Baughman said. “I don’t spend a whole lot of time talking to pitchers about the game plan that we try to come up with. I don’t want them thinking a lot. …I just want them to pitch. He was great.”

Oxford grabbed a 1-0 lead in the first inning off a sacrifice-fly by Clark Stovall. Stovall came through later with an inside the park home run off a Southaven error, giving Oxford the winning run in the bottom of the sixth inning.

Stovall finished the night 2-for-2 and an RBI. Sam Bianco and Tyler Smith each went 1-for-3.