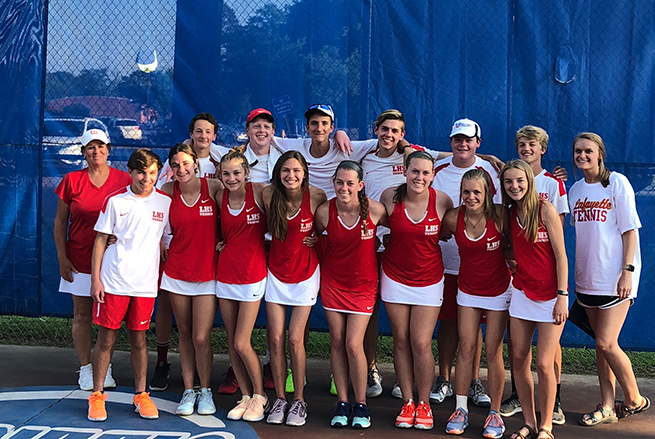 The dream season continues for Lafayette.

In their fourth attempt at reaching the state finals the Commodores managed to punch their ticket with a 6-1 win over Grenada in the Class 5A North Half championship in Grenada on Tuesday.

It is the program’s first North Half championship — they made it to the Class 4A North Half match three previous times. Lafayette will face Stone County on Monday for the Class 5A state championship at the Parham Bridges Tennis Center in Jackson.

“We both changed up our lineups and I kind of gambled a little bit and ended up paying off for me,” Lafayette coach Debbie Swindoll said. “Being in this venue. It was kind of great for us to do it (at Grenada) in a hostile environment where the chips are against you. I feel like I got to learn a lot more about Stone County.

The history-making point came from Lafayette’s mixed doubles team of Barrett Childress and Lucy Wilson. The pair defeated Grenada’s Tanner Vance and Madison Martin 6-1, 6-0 to send the Commodores (11-4) to Jackson.

The boy’s doubles matches were sweeps for the Commodores also. The No. 2 pair of William Smith and Nate Lowry were making their first varsity starts and came away with a 6-2, 6-4 win over Grenada’s Ben Brasher and Bratton Williamsby. The No. 1 team of Dawson Welch and Foster Roush won their match 6-7, 6-3 (10-4).

The Class 5A state title match will begin at 9 a.m. on Monday.