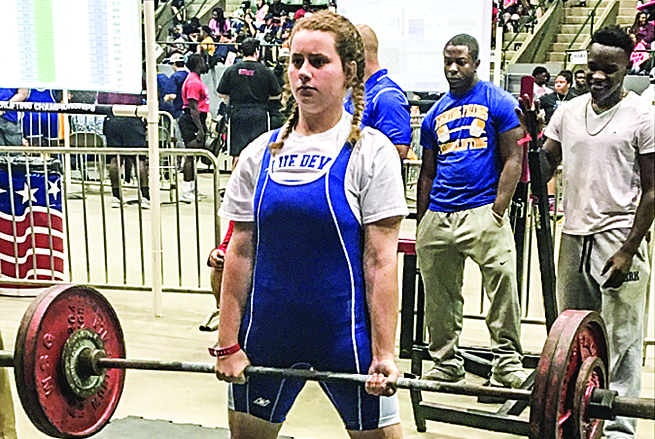 Still in its infancy the Water Valley powerlifting program has become a title contender and the rest of the Class 3A ranks are having to take notice. Last year was the Blue Devils first season with a powerlifting team and took a handful of lifters to the state meet in Jackson.

This season coach Vaughn Daniels had a lot more than a few qualify and the Blue Devils finished third in the state meet last month.

“We actually made some huge gains,” Daniels said. “After finishing fourth last year they were really ticked off. They kind of came in a fought harder than I’ve ever seen. …this year guys and girls would actually get up at six in the morning and come make workouts before school. Just putting in that little extra and I think that played a big part in that.”

The motivation to do better than their inaugural showing was plenty for Water Valley to hit the weight room in earnest in October — when the powerlifting season begins — and the results began to show instantly.

In 2017 Daniels had one girl qualify for the state meet, this year he was able to take four girls down to the Mississippi Coliseum. Hannah Higdon, Mercedes Sims, Tania Hawkins and Sara Ellis Dean represented the Blue Devils. They finished 11th with four points in the Class II competition. Many of Daniels lifters on the girls’ side are multi-sport athletes who are currently playing softball. Hitting the weight room has not only helped the powerlifting team but also their own performances in other sports.

“With the girls I’ll be senior heavy next year but getting their feet wet is the experience of a lot of those kids,” Daniels said. “They’ve never experienced that many teams all at once like that. …a lot of them were like, ‘I don’t know if I’m ready for this.’ They realized real quick I can get strong and keep it lean and they saw the gains they were making in their other sports. They started seeing the gains in just their hits and how much better their batting had gotten.”

To prepare a new team like his girls’ squad for a sensory overload environment that is the state meet Daniels was able to raise enough funds from team sponsors and fundraisers to go to a few invitational meets and host a meet of their own throughout the season to get them ready. The Lady Blue Devils won their district this season.

On the boys side it was another step in the right direction. With 26 points Water Valley finished one point shy of tying Velma Jackson for second place. Marley Cook, Marcus Burt, Javarious Benson, Ty Morgan, Ray Turner and Kenterrious Rucker all qualified out of North Half to try and compete for a state title. Emmanuel Judson failed to qualify out of North Half due to faults but if Judson had moved on and lifted in Jackson it might have give the Blue Devils a shot at second or better.

Cook, who was one of the lifters who competed in last year’s state meet nearly set the state record this year in the squat. Cook lifted 675 pounds and had the new record for about thirty minutes before Laquincy Edmonds of Forest lifted 680 pounds to pass Cook.

“I didn’t think we would have guys who just jumped that much but kids really bought into the program,” Daniels said. “If for chance nothing changes between now and next year we should win the whole thing in (Class 3A).”

Area teams have strong showings at North Half track…