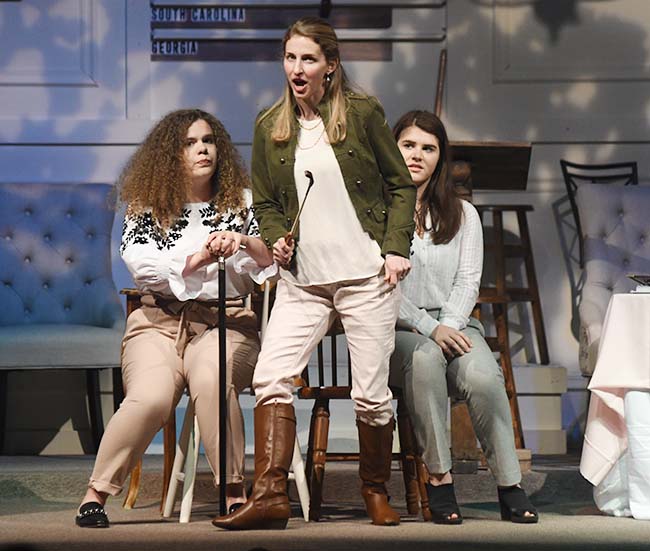 When people ask Oxford High School theater teacher John Davenport why he chose an all-female cast for the upcoming spring musical production of “1776,” his answer is simple.

“My answer has been, ‘Why not?’” Davenport said.

The show will be held at 7 p.m. Friday and Saturday and 2 p.m. on Sunday in the Kayla Mize Auditorium.

“1776” is a musical based on the events surrounding the signing of the Declaration of Independence. It dramatizes the efforts of John Adams to persuade his colleagues to vote for American independence and to sign the document.

The show premiered on Broadway in 1969, was nominated for five Tony awards. The production won three, including Best Musical.

The show is traditionally staged with all men; however, Davenport chose to cast females.

“We are not ignoring the fact that the cast consists solely of women, even though pronouns are not being changed,” Davenport said. “These actresses are not imitating men but rather creating the female equivalent to these historical figures.”

Sallie Hardy, an OHS senior with 16 OHS shows under her belt, is playing John Adams and said she’s enjoyed the challenge of playing a male character.

“It is very interesting playing a man because there are a lot of natural reactions the character has, but I would never think of having,” Hardy said. “It has been difficult to find the female equivalent to some of these instincts, but I think everyone in the show is handling it really well.”

Davenport said the costumes would be more contemporary than what people wore in 1776; however, the dialogue is period appropriate as given by the text and lyrics.

“It has been interesting to hear this story unfold through the voices of women,” Davenport said. “When it comes down to it, the matter of independence might have been discussed differently as different tactics might have been used in an all-female Congress, but we feel very strongly the outcome would have been the same. The women in the founding fathers’ lives were integral in making such historical endeavors possible, so we can’t ignore the influence women had on this important topic and many others, as the second continental congress met in Philadelphia.”

Davenport said faculty members would be performing in the show along with the students to “help balance out age, life experience and voices.”

“There are so many characters, and all of them are relatable to everyone in some way,” she said.

For more information and to purchase tickets – $10 for adults, $5 for students – visit https://www.oxfordsd.org/OHS.