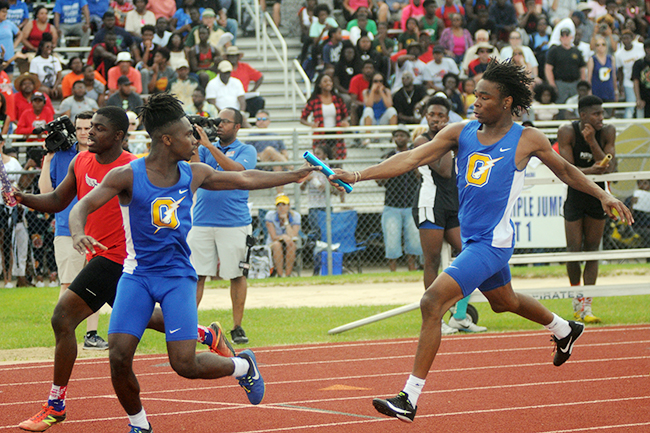 Oxford's Byron Pearson, left, takes the baton from Ladarrius Giles in the 4x200 meter relay during the MHSAA Class 6A State Track & Field Championship at Woody Barnett Track & Field Complex in Pearl, Miss. on Friday, May 4, 2018. The Chargers won the race with a time of 1:27.79 seconds.

PEARL — Oxford’s first run through the Class 6A ranks nearly had a comeback ending.

The Chargers competed in the MHSAA Class 6A state track & field championships at the Woody Barnett Track & Field Complex on Friday in Pearl and used an afternoon surge to claim second place with 84 points. Pearl won their second 6A state title in the past three years with 95 points. The second place finish ended a run of four consecutive state titles won by the Chargers.

The Chargers picked up four individual state titles on Friday. Quentin Wilfawn won Oxford’s first 6A track title with his win in the discus throw. Wilfawn’s attempt of 143 feet, 11 inches was enough to give him a title in the final event of his high school career. He also placed fifth in the shot put event earlier in the day.

“It means a lot because not a lot of sports have been able to win a 6A title,” Wilfawn said. “So, me being able to go out here and compete in 6A, it makes you feel good.”

Wilfawn was the only Charger competing in the men’s field events, meaning Oxford was going to have to make a charge during the track events.

The 4×100 and 4×400 meter relay teams took second place in their respective events.

Clay Cromwell took home fifth place in the 300 meter intermediate hurdles with a time of 41.52 seconds.

Ivy came home with a second place in the 400 meter dash with a time of 49.46 seconds, less than a second behind Terry’s DeAndre McGriggs. Ivy also finished third in the 200 meter dash (21.94).

The Lady Chargers were unable to make it a three-peat this year after winning the 5A title the past two seasons, finishing tied for ninth place with 29 points with DeSoto Central. Clinton continued their dominance, picking up their sixth straight Class 6A girls’ title with 129 points.

Ashley Epps won Oxford’s only state title on the girl’s side, taking the 300 meter low hurdles title with a time of 44.98 seconds. Epps also finished fifth in the 100 meter high hurdles (15.71).

Kyla Johnson was the only other Lady Charger to make the podium, finishing third in the high jump with an attempt of 5 feet, 2 inches. Elizabeth DuPerier finished fifth in the pole vault (9-00).