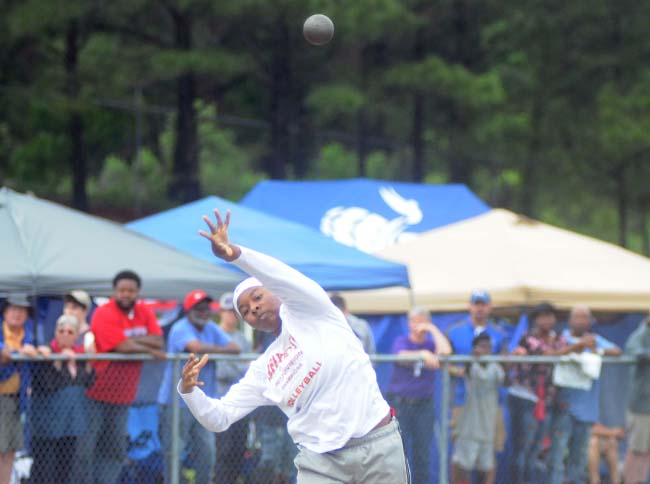 PEARL — Lafayette brought the largest group of athletes down to the track & field state meet in recent memory and came away with a pair of Top-10 finishes. The Commodores competed in the MHSAA Class 5A state track & field championships at the Woody Barnett Track & Field Complex on Saturday.

Like Oxford on Friday it was a day of seeing how Lafayette stacked up against a new crop of teams from across the state. Saturday was also microcosm of how the track season has gone for everyone. Rain moved into the area late Friday night-early Saturday morning and stayed until midday Saturday. It caused the meet to be delayed by 90 minutes.

Once things got underway the Commodores began find themselves on the podiums. The Lady Commodores finished 6th with 37 points and three Top-three results. Center Hill won the girl’s 5A title with 124 points for their first track & field state title.

“It was a little up and down (day),” Lafayette coach Ben Mikell said. “We missed a lot of practices (this season) and I think everybody did. I don’t think anybody adapted (to the weather) that well. …I’m not too disappointed in the season. I wish we could have done better. I like to have guys win state championship but we had some young guys get medals and folks who’d never run before.”

In the field events Mariah Holland placed second in the girl’s shot put with an attempt of 35 feet, six inches. Xhiir Burgess earned third place finish in the girl’s triple jump with a jump of 36-02.

Anna Lafferty placed fifth in the girl’s pole vault with a vault of eight feet.

On the track it was a tough day for the Commodores.

The boy’s team had four athletes and one relay team competing in the 5A meet and finished 10th with 26 points. Hattiesburg boys also won their first state title, claiming the 5A title with 106 points.

Lafayette had two Top-3 finishes on the day. It was a rare occasion for the Commdores, having a competitor in both the boy’s and girl’s pole vault events for only the second time. Cole Fortner came away with a third place finish with a vault of 10 feet, 6 inches. He earned the bronze due to having the least amount of missed attempts – Fortner cleared every height on the first try.

On the track Michael Mathis closed strong in the 300 meter intermediate hurdles and placed third with a time of 41.66 seconds after a fall early in the race. Mathis also placed seventh in the 110 meter hurdles (20.93).

Tabias Brown finished just ahead of Mathis in the 110 hurdles with a time of 18 seconds flat.

“I was real happy to see Mike medal after taking that fall,” Mikell said. “He hadn’t run it much. He’s only run it this year but he’s always really had a strong finish in that 300. I didn’t realize it was that strong.”

Brandon Turnage placed fourth in the 400 meter dash (50.77) just missing the podium by .42 seconds after a bad start on the first turn.

The 4×200 meter relay team of Brown, Xzavious Stokes, DeDe Miller and Jagger Stovall placed fifth with a time of 1:31.65.