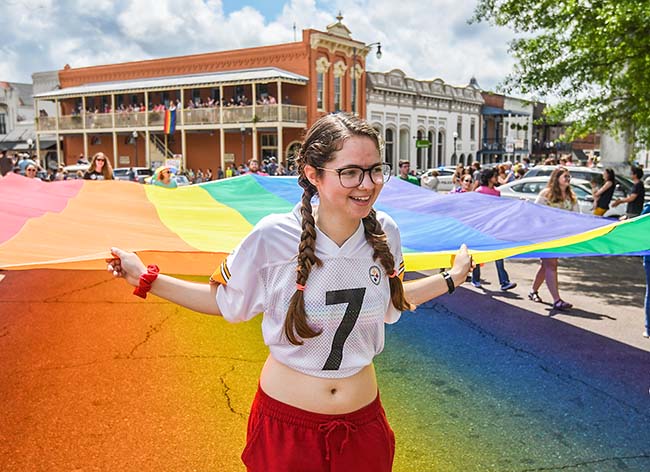 The 3rd annual Pride Parade rolls through the Square in Oxford, Miss. on Saturday, May 5, 2018. (Bruce Newman, Oxford Eagle via AP)

As if on cue, the rain stopped, the clouds parted and the sun shined down on those marching, and watching, the 2018 Pride Parade in Oxford Saturday.

The morning rain only stalled the parade for a few minutes. More than 20 groups lined up and started walking at about 2 p.m.

“If the rain holds out for the entire parade, I’ll be very happy,” said one of the event organizers, Kevin Cozart, operations coordinator at the Sarah Isom Center for Women and Gender Studies.

The rain did hold out; however, parade participants didn’t hold out on making sure every child along the parade path left with handfuls of candy and colorful beads draped around their necks.

The parade started at the Gertrude Ford Performing Arts Center, up University Avenue to South Lamar Boulevard where it turned toward the Square.

After walking around the Square, the parade headed down East Jackson Avenue to Depot Street and ended back in the parking lot.

One of the first and most colorful floats belonged to the “Exalted Court of Ms. Mary Bobo.”

“It’s a boarding house in Lynchburg, Tennessee that came up in a conversation one night,” said Courtney Hall. “Everyone liked the sound of it, and we adopted her as our mascot for the parade, and we decided Susan McPhail was the perfect Mary Bobo.”

McPhail said she and her friends decided to join the parade to help spread a message of love.

“We believe in equality, and we believe that love is love and we want the state of Mississippi to recognize it,” McPhail said.

The Oxford High School Gay-Straight Alliance didn’t have a float Saturday, but that didn’t stop its members from dressing up in rainbow-colored clothing and glitter while holding up a large banner.

Alex Lowe and Sarah Boothe are both seniors at OHS and are co-leaders of the GSA.

Boothe said the parade is a good way to educate the community about the GSA.

“A lot of people don’t know the GSA exists, so it’s a good way to show that OHS cares,” she said.

The parade was one of several events held during Pride Week last week.

Pilot pleads guilty to operating, training without a valid…