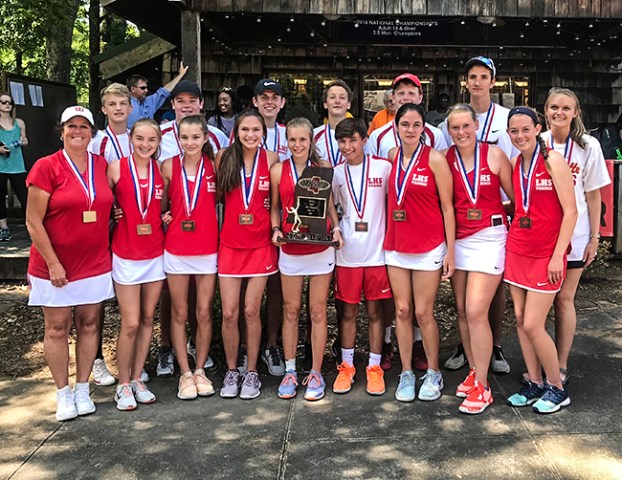 The Lafayette High tennis teams stands with the Class 5A state championship trophy after winning their first state title in school history on Monday at Parham Bridges Tennis Center in Jackson. (Jake Thompson)

JACKSON — Monday was the culmination of a seven year journey for Debbie Swindoll and the Lafayette High tennis program.

Swindoll kept working, building her program to try and get to the consistent level of their neighbors to the north of Highway 6.

On a warm May morning everything fell into place and the Commodores found the mountain top, defeating Stone County 4-3 in the Class 5A state tennis championship at the Parham Bridges Tennis Center.

It is the first state tennis title for Lafayette in school history and they claimed in their first state championship appearance.

“Seven years in the making,” Swindoll said with a smile once the Commodores had secured the title.

At the onset of the season Swindoll did not shy away from stating this was the year Lafayette could do something special. That this was the year she finally had all those missing ‘cogs’ to get them to Jackson.

During their time in Class 4A Lafayette made it to the North Half championship three times but could never get past powerhouse New Albany. This season they were out of 4A and into the friendlier confines of Class 5A, essentially replacing Oxford who had moved up to 6A.

“I had that feeling we had a really legit shot and as the season progressed we kept getting better and better,” Swindoll. “We had a really good team. A deep team.”

The depth showed throughout the playoffs as Lafayette ran through opponents, including their 6-1 win over Grenada to clinch their first North Half title.

It was more of the same on Monday at the expense of a Stone County that was making their eighth consecutive state championship appearance. For the past seven years they fell at the hands of Oxford and now had to play the role of bridesmaid to another Lafayette County school.

Ally Bowen was one of those pieces that Swindoll has had for the past few years that provided what she called ‘stability’. Bowen, who won the Class 4A individual girl’s singles title last year as a freshman, provided that stability again with a 6-0, 6-0 win over Stone County’s Josie Lyons.

“It was a very special team,” Bowen said. “We’d been working really hard this season. …I think all of us worked hard enough to where we were pretty good.”

What had been missing was a consistent player to fill the boy’s singles role. Enter Manual Lopez-Wolff. The Colombian native came to Lafayette as an exchange student and made Swindoll’s team. Wolff suffered an injury early in the year but was back by the time division play started and provided a spark.

Wolff defeated the Tomcats’ Lawson Pearson 6-2, 6-3 to give Lafayette both single’s points.

If Wolff had not arrived Swindoll had Dawson Welch slotted to be her single’s player. Instead Welch stayed as a doubles player and giving the Commodores more depth.

“Adding that key to the cog gave me more maneuverability with Dawson,” Swindoll. “It would have weakened my doubles because (Welch) is a really good doubles player.”

Welch and Roush delivered Lafayette to the mountain top, winning 6-2, 6-2 to be the historic clinching point.

Now, the task is to try and stay on top of the Class 5A mountain. It will not be an easy task with Swindoll losing five seniors. All five played in Monday’s match.

No. 4 Ole Miss rallies to salvage game at South Carolina