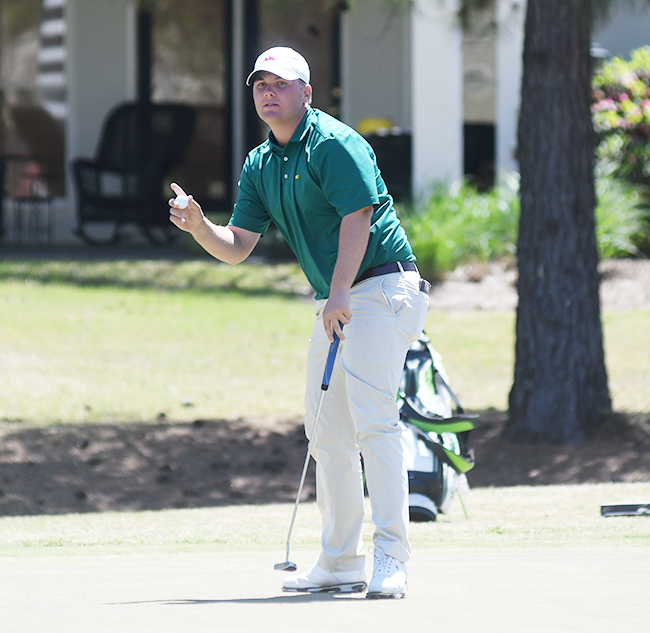 Braden Thornberry acknowledges the galley following him after getting a birdie on the 6th hole during the second round of the Web.com Tour's North Mississippi Classic at the Country Club of Oxford, in Oxford, Miss. on Friday, April 20, 2018.

Braden Thornberry is still an amateur golfer — for now — but next month he will be playing among the professionals once again.

The PGA Tour’s FedEx St. Jude Classic announced on Monday that Thornberry will be in the field of Memphis’ annual tournament at TPC Southwind.

Thornberry accepted a sponsor’s exemption for the second year in a row. Last year the NCAA Champion played in his first PGA Tour event and after making the cut he rocketed up the leaderboard in the final round.

“I’m so excited to play in Memphis again,” Thornberry said in a statement released by the university. “Last year was so cool having all of the support that I had – so many people that I hadn’t seen in years came out to support – and that was a really cool feeling. Like I’ve said before, the goal of a week like this is to gain as much exposure and experience at the professional level as possible. Looking forward to getting after it in June.”

The Rebel earned a Top-4 finish with a final round 65. At one point in the round Thornberry was within one shot of the lead before finishing at 8-under and two shots back of winner Daniel Berger.

It will be the fifth PGA event Thornberry will compete in the span of a year. The most recent event was last month’s Web.com Tour’s North Mississippi Classic. He finished T-22 in the inaugural event and made his third cut in four attempts.

The next event for Thornberry and the rest of the Ole Miss golf team is the NCAA Tournament. The Rebels were selected to play in the College Station, Texas Regional which begins on May 14.