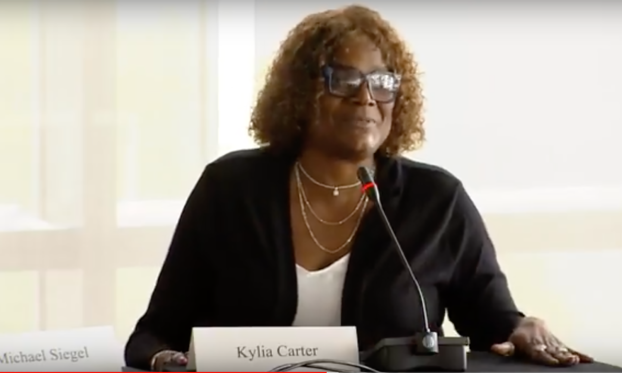 A former Ole Miss women’s basketball player gave her thoughts on the hotly debated topic of amateurism in college athletics Monday, and she didn’t hold back.

Serving as a panelist at the Knight Commission, an independent group that promotes reform to enhance the educational mission of college sports, Kylia Carter took aim at the NCAA, which reportedly made a whopping $1.1 billion in revenue for the 2017 fiscal year yet doesn’t allow those responsible for generating those funds, the student-athletes, to see any of it outside of a scholarship and the cost of attendance.

“When I pull back the layers, the problem that I see is not with the student-athlete,” Carter said. “It’s not with the coaches and the institutions of higher learning, but it’s with a system, the only system I have ever seen where the laborers are the only people not being compensated for the work that they do while those in charge receive mighty compensation. The only two systems where I’ve known that to be in place are slavery and the prison system. And now I see the NCAA as overseers of a system that is identical to that.”

Carter is well-versed in the inner workings of college athletics, particularly basketball. Carter, a Mississippi native, played for Ole Miss in the late 1980s while her husband, Wendell Carter Sr., played at Delta State and overseas. Their son, Wendell Carter Jr., is widely projected to be a top-10 pick in this year’s NBA Draft after playing one season at Duke.

Carter’s son’s name also came up in documents related to the FBI’s long-running investigation into the sport as a player who allegedly had a meeting with Christian Dawkins, an agent who was one of 10 people arrested as part of an investigation into bribes used to steer recruits to certain schools.

A former five-star recruit, Carter Jr. likely would’ve been a first-round pick last year if not for the NBA’s one-and-done rule, which requires players to be one year removed from high school or 19 years old in order to be draft-eligible. Carter said delaying the opportunity for her son and other players of equal talent level to make money professionally is all about greed, adding there’s no educational value for players who know they’re only going to college for two semesters.

“At the end of the day, the talent is being purchased, but the talented are not receiving any of the benefit,” Carter said. “The colleges are only recruiting the talented kids for their talent. They’re not recruiting them because they’ll excel academically at their institutions, so why is that a benefit in them going to that institution?

Carter said she’s a proponent of higher education — she and Wendell Sr. pushed for their son to go to Harvard before he ultimately chose Duke — but she’d also like to see the NCAA make it a worthwhile endeavor for players like her son. She proposed a “two-year certificate” where those players take classes geared toward the business side of the sport they’re pursuing.

Football players are required to be three years removed from high school before entering the NFL Draft. Baseball players can get their professional careers started straight out of high school if they’re drafted, but drafted players who choose to go to a four-year college must stay for three years or be 21 years old before re-entering the MLB Draft.

“I’m very passionate about this not because I played at Ole Miss and not because my son is entering the draft as a lottery pick but because of the families that have been affected that look like my son and me and our family,” Carter said.