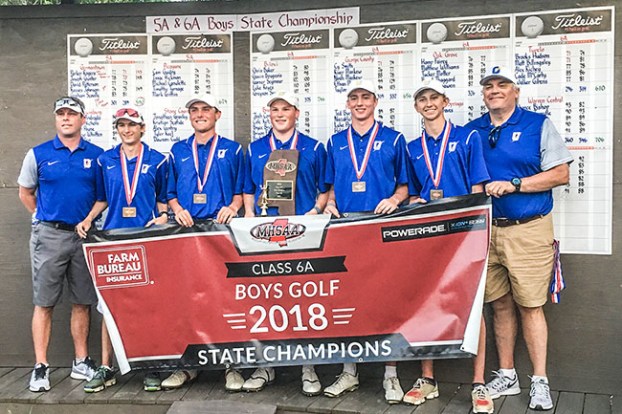 The Oxford High golf team stand with the Class 6A state championship trophy after winning the school’s first Class 6A championship at Lake Caroline golf course in Madison on Thursday, May 3, 2018.

The jump to Class 6A has been a tough adjustment for most of Oxford’s teams this year.

Nearly everyone but the golf team.

The Chargers rolled into 6A after winning the Class 5A championship last season and picked up right where they left off, winning every tournament they competed in this season.

Oxford won the school’s first Class 6A state championship, picking up their second in as many years and sixth overall title in program history.

Golf is one of those sports where teams from every classification will compete in a tournament, meaning this was not the first time Oxford had played against 6A schools.

No adjustment to level of competition was needed.

It was not until the 6A state championship tournament — held at Lake Caroline in Madison — last week that the Chargers felt the level of competition had been raised. For the rest of the field that did not offer much help with Oxford winning by 14 strokes with a combined score of 585 (9-over par).

Northwest Rankin came in second with a 23-over score of 599 on the Par-72 course. DeSoto Central and Tupelo finished tied for third with a score of 34-over par.

“It was definitely a course we knew we could go low on,” CJ Easley said. “But, it was mainly just sticking to our game plan. We knew that if we went down there and played like we were supposed to we’d have a chance to win. It wasn’t really the course we were playing. It was just kind of doing our own thing.”

The battle for the Class 6A title may have had a little more drama added to if it were not for the play of one Charger freshman. Taylor Durham had not had a round under 80 most of the season. When Oxford got to Lake Caroline Durham shot rounds of 73 (1-over) and 75 (3-over).

Durham’s unexpected play gave Oxford an even bigger cushion on the field they did not plan on having.

“(My game) was clicking for sure but I just really liked that course,” Durham said. “I played well the first day and I just had the confidence the second day.”

Oxford coach Steve Herring knew the trophy would be coming back to Oxford after his team got through the 14th hole in the final round last Thursday afternoon.

The Chargers will be the heavy favorites to repeat with only losing one player from this year’s team. Easley is going to early enroll at Auburn this December.

Easley and Baker tied for third in the individual championship, shooting Even over the two-day championship. Mark McManus shot 5-over for the tournament.

Dallas Woolfolk is stepping away from baseball. Ole Miss announced Wednesday that Woolfolk is leaving the team effective immediately. In... read more