Oxford using platoon mentality in first run through 6A playoffs 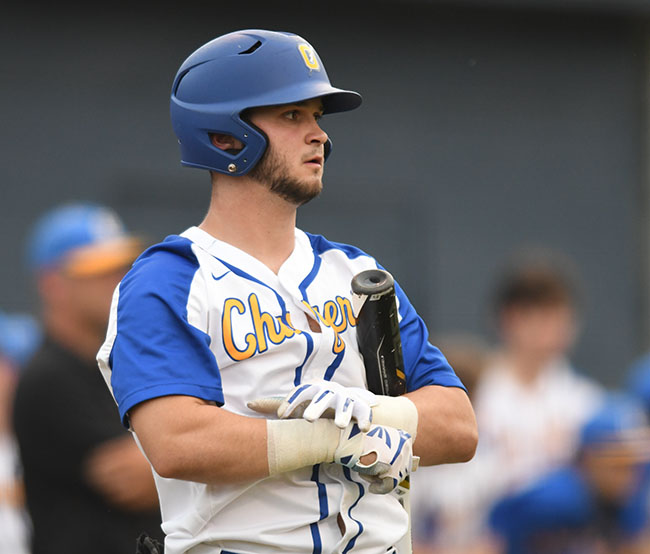 Oxford High's Drew Bianco against Madison Central during the MHSAA Class 6A playoffs at Edwin Moak Field in Oxford, Miss. on Thursday, May 3, 2018. Madison Central won 4-0 in game 1 of a best-of-three series. (Bruce Newman, Oxford Eagle via AP)

Before Chris Baughman could call time to play some strategy on the base paths Parker Stinnett hit a bases clearing double to tie Madison Central in the bottom of the sixth in Saturday’s Game 3 of their third round series. The Oxford coach could not get time called due to the fact Edwin Moak Field was too loud for even Baughman to hear himself.

Oxford went on to win in extra innings, advancing to their first Class 6A North Half series, which begins on Thursday against DeSoto Central. It has been the little things like that which have fallen into place and worked out for the Chargers this season.

This is not the Chargers (23-9) of recent years that could rely on a handful of players to get them through the playoffs and march their way to Trustmark Park in Pearl. It has required an ‘all hands on deck’ approach. Nearly a mentality of a platoon going into battle knowing it will take every player in the dugout to secure a win.

Baughman awarded four game balls after Saturday’s series-clinching win, accentuating how much this season has truly been a team sport. Stinnett, Bianco, Clark Stovall and Eli Wicker played a part in the win and were rewarded for their effort.

“As we were coming off the field and everything was still a blur my mind turned to who was getting a game ball. It was going to be extremely difficult to give one,” Baughman said. “I couldn’t give one. I should’ve given every kid out there one because the dugout had great energy. They helped create the atmosphere and the fans fed off it.”

Bianco played the series at what Baughman described ’60 percent’ but in his final at-bat hit a ball off the wall and scored the winning run. Stovall came through with the winning hit to score Bianco and Stinnett had the game-tying double.

Wicker, along with Hays Roth, got Oxford through Saturday’s game but they have also been some of the unsung heroes on the mound all season. Stinnett, Tyler Smith and Bo Gatlin have taken the majority of the workload but Roth and Wicker’s relief work has been vital to the Chargers’ run to the 6A semifinals.

“Those guys will never know at this level how nice it is as a coach to have guys, no matter what age, behind your one, two and three that you count on,” Baughman said. “That you trust. That you know that is going to come in and give you a chance. They may not strike out every batter. They may give up a couple ones. …to have the confidence in those guys knowing they’ll give you as good a job as you need to win a game is nice.”

Two more wins stand between Oxford and a berth in the Class 6A state championship series next week. As is the case in 6A they have another major obstacle in their path in the Jaguars (25-8).

The Jaguars boast a roster full of players who will play in Division-1 following their high school careers. Blaze Jordan, Hunter French, and Cade Smith are heading to Mississippi State and another, Kyle Booker, is heading to Tennessee in two years.

Jordan is lethal with his bat and Smith is DeSoto Central’s ace on the mound with a 7-3 record.

“It’s like we’re playing Madison Central again,” Baughman said. “They’re really good. Jordan is one of the top kids in the state. French gets on base in front of him. But, you expect that this time of year. I know our kids look at it and say, ‘we’re pretty dang good, too.’”