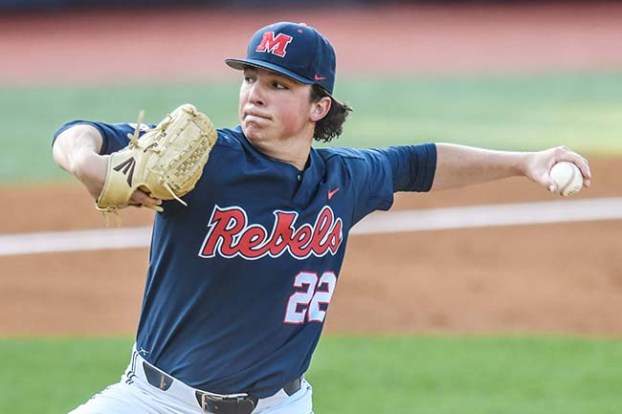 Ryan Rolison bounces back, leads No. 6 Ole Miss past No. 19 Auburn in series opener

Ole Miss needed a quality start from Ryan Rolison. The left-hander bounced back from his worst outing of the season to deliver it.

Rolison allowed two runs and pitched into the seventh inning before turning things over to the bullpen, which closed out the sixth-ranked Rebels’ 5-4 win over No. 19 Auburn on Thursday at Oxford-University Stadium. Ole Miss (37-13, 14-11 SEC) moved within half a game of Western Division leader Arkansas with a win the Rebels felt they needed to best position themselves for a series win with Casey Mize, widely projected to be the No. 1 overall pick in this year’s MLB Draft, set to toe the rubber for Auburn (35-15, 13-12) on Friday.

That game will start at 6:30 p.m. (SEC Network+) before the teams end the series with a 4 p.m. first pitch Saturday.

“It’s always nice to come out and get the first game of the series,” said outfielder Will Golsan, who hit his fourth home run of the season and drove in three runs. “Tomorrow is swing day. Casey is going to be good, so we’re just going to have to bear down and compete.”

Auburn coach Butch Thompson held Mize for the middle game of the series in order to give his ace a full week of rest, throwing sophomore Davis Daniel in his place. The Rebels tagged Daniel (3-4) for six hits, including a two-run home run from Golsan and a solo shot from Nick Fortes, to build a 5-1 lead before chasing the right-hander in the sixth.

After allowing season-highs in hits (10) and earned runs (8) in his shortest outing of the season last weekend at South Carolina, Rolison made the lead stand up with better command as the game wore on. Rolison (7-4) thwarted the Tigers’ biggest threat against him in the third after a single and a pair of walks, getting a strikeout and a groundout to strand the bases loaded and keep momentum on Ole Miss’ side after Golsan’s homer a half-inning earlier.

“Me and (Ole Miss) coach (Mike) B(ianco) talked about it. I needed to make the big pitch when it mattered and I haven’t in the past,” said Rolison, who’s pitched into the seventh in three of his last four starts. “I was able to get that fastball in there for a big strikeout and get out of that inning with no damage.”

Said Bianco, “That’s so big. People look at the seventh, but that may be the biggest inning of the game.”

Rolison kept Auburn scoreless until Steven Williams’ solo home run in the sixth. Ryan Olenek went 0-for-4 to end his 23-game hitting streak — tied for third-longest in program history — but Ole Miss added on with Tyler Keenan’s RBI double and an RBI single from Golsan to give Rolison the four-run lead by the time he left after allowing two hits and a walk in the seventh. He scattered five hits, walked four and struck out five.

“My fastball command was better,” Rolison said. “I was able to get a slider over when I needed to and just had a good feel for the zone tonight. Was able to fill it up.”

Houston Roth came on for just his second appearance in the last month after dealing with a hamstring injury and retired one of the three batters he faced, though a two-run error by Grae Kessinger on Williams’ infield chopper extended the inning and got Auburn within a run.

Parker Caracci came on and struck out Brett Wright to keep the Rebels’ lead intact. Auburn got the tying run in scoring position in the eighth on Brendan Venter’s one-out double, but Caracci got a foulout and a strikeout to strand him before retiring the Tigers in order in the ninth for the seven-out save.

Dallas Woolfolk is stepping away from baseball. Ole Miss announced Wednesday that Woolfolk is leaving the team effective immediately. In... read more