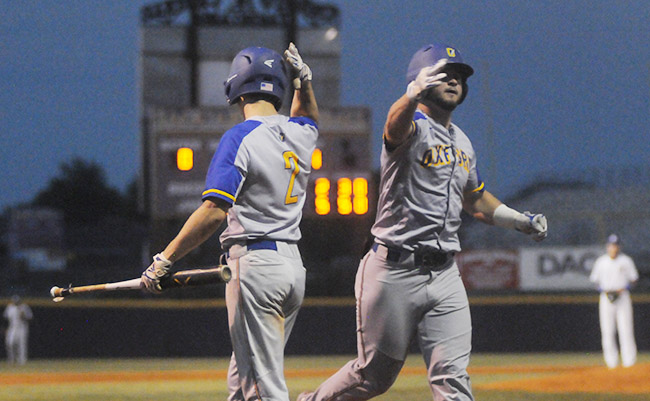 Oxford High's Drew Bianco (1) hits a home run and is congratulated by teammate Sam Bianco against Desoto Central in MHSAA Class 6A baseball playoff action in Southaven, Miss. on Thursday, May 10, 2018.

SOUTHAVEN — Once again, Oxford finds itself on the brink of elimination and once again it has the ability to walk back from the ledge and keep its season alive.

One bad inning by Parker Stinnett on the mound and one miscue in the outfield late in the game put Oxford in a hole they could not get out of. The Chargers lost 6-5 to Desoto Central in Game 1 of their Class 6A North Half championship at DeSoto Central High School on Thursday.

Game 2 is today back at Edwin Moak Field where Oxford (23-10) will try to keep their season going. First pitch is set for 7 p.m.

The Jaguars (26-8) plated five runs in the second inning to grab the early 5-0 lead. A two-RBI hit by designated hitter Jacob Compton, a fielder’s choice on a bunt by catcher Connar Gardner and a two-run home run by shortstop Kamren James did the damage.

“I called a terrible second inning,” Oxford coach Chris Baughman said postgame. “It’s on me 100 percent. All of it’s on me. I don’t want any kid to feel like he’s got any blame or any responsibility. It was my fault.”

Outside of the second frame, Stinnett pitched five innings of one-run baseball. Going the distance, Stinnett gave up six runs off seven hits and struck out 10 while issuing one walk.

Two innings later, Oxford’s bats began to warm up after Jaguar starter Cade Smith went through the order once. The Chargers responded with two runs in the top of the fourth inning and shortstop Drew Bianco hit a solo home run — his fifth of the season — in the top of the fifth inning to make it a two-run game at the time.

Smith was chased after 4 1/3 innings of work. The Mississippi State commit allowed three runs off five hits and he walked three while striking out six Charger batters.

“That’s kind of what they’ve done all year,” Baughman said of Cade’s early exit. “They’ve got a really deep bullpen. They try to, at most, give (Smith) one time through the order and try to be effective. That’s what they did.”

DeSoto Central responded with a run in the bottom of the fifth to make it a 6-3 lead. Oxford answered with two runs in the top of the seventh for the final margin before Bo Gatlin popped out to kill the late rally.

Clark Stovall went 2-for-2 with two RBIs, Stinnett finished 2-for-4 and two RBIs while Bianco went 1-for-4 at the plate and one RBI.

With Stinnett pitching a complete game, it allowed all of Oxford’s bullpen to get one more night off while the Jaguars used up Smith’s arm and three arms out of the bullpen to finish off the final 2 2/3 innings.