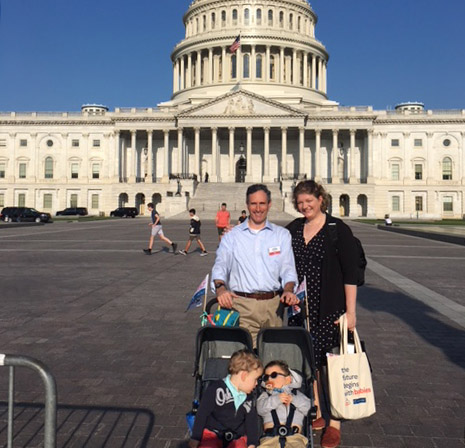 Parents from across the country gathered in Washington, D.C. this week for the Zero to Three organization’s “Strolling Thunder” rally, and one Oxford family was there, representing the state of Mississippi.

Zero to Three is a non-partisan research and advocacy group that works on behalf of families with infants and toddlers. The group’s policy agenda advocates on four fronts: good health, strong families, positive early learning experiences and early childhood systems.

Susan Stearns, her husband Dan and their 2-year-old twin boys, Jack and Oscar, decided to make the trip to D.C. to meet with lawmakers from Mississippi. When she heard about Zero to Three’s mission, Stearns said she found the opportunity “highly compelling.” Her hope, she said, was to bring more awareness to the need for early intervention services and paid maternal leave.

“When I heard about Zero to Three and their lobbying trip, I thought I would apply to have our family act as a ‘spokesfamily’ as it were for Mississippi’s families, especially those that are raising kids with special needs and who have fewer resources available to them than we do,” Stearns said. “One of the big things we talked about was the importance of investing in early intervention services, which here in Mississippi have just gone through a series of huge cuts.”

The Stearns family is one who needs these services. Jack and Oscar were born prematurely at 25 weeks gestation, and spent 186 days in the hospital, fighting for their lives. Oscar weighed 2 pounds, 2 ounces, and Jack weighed 1 pound, 10 ounces. At birth, they each had about a 60 percent chance of survival.

For those 186 days, and beyond, the Stearns found themselves to be one of those families. By the time they got out of the hospital, they had amassed over $5 million in healthcare costs.

Today, Jack is a healthy toddler who loves to run, and according to his mother, the only lingering sign of his prematurity is a tendency to get winded easily.

Oscar, on the other hand, has faced a more difficult road. At three weeks old, Oscar became extremely sick: he developed a condition called necrotizing enterocolitis. NEC is a serious disease that affects premature infants, and has a 25 percent fatality rate. Doctors rushed Oscar into emergency surgery, telling his parents there was a 15 percent survival rate for the procedure and removing 30 centimeters of his small bowel. Oscar beat the odds to survive, but he suffered from low blood pressure resulting in a loss of oxygen to his brain during the surgery. Oscar now has severe cerebral palsy – although he’s 2, he cannot roll over or sit independently, much less walk or talk. He also has cortical visual impairment due to his brain injury, and sees a specialist from the Mississippi School for the Blind every few weeks. Stearns said Oscar doesn’t let his disability phase him, and is still an “incredibly sweet, cheerful little guy” who loves silly noises and music.

Early intervention services include physical, speech and occupational therapies, as well as other services designed to help children get on track with their development. For example, at six months old, Jack was behind on his motor skills, but today he’s caught up. It’s equally as important for Oscar, especially during the early childhood period of rapid brain growth. If his therapies can help him sit up, there’s a 95 percent chance he’ll walk one day. Those are odds his mother said she’s betting on, ones that will prevent more intensive care in the future.

Because the boys need to have their health closely monitored, the family spends most of their time at various doctor appointments.

“Our lives revolve around therapies and doctor appointments. In a typical week, Oscar has at least six and often seven sessions of various therapies,” Stearns said. “Last month, Oscar had seven doctor’s visits and Jack had two scattered from Oxford to Memphis to Jackson.”

The other half of the Stearns family’s investment in the “Strolling Thunder” cause is advocating for paid maternal leave. While the twins were in the hospital, and nearly every time they’ve been sick, their mother has been with them, and she said there’s no place she’d rather be.

However, some NICU families aren’t so fortunate. Spending 186 days anywhere gives a person a well-rounded picture of the way things are, and Stearns said the hospital was no different.

“As the only ones who saw our babies every day, we were critically important in noticing changes that had occurred in them, in catching equipment malfunctions and in learning what it would take to care for two highly complicated infants,” she said. “But walking through the NICU, we saw baby after baby with no one there to  comfort it; babies crying while nurses, who were working their tails off, saw to another patient whose needs were more immediately critical. Maternity leave is always important, but for families like mine – and like all the others we saw in the NICU – it can literally be life-saving. I wanted the chance to go to Congress and tell our representatives about what we had seen, and what we knew. We can and must do better.”

Stearns explained that she and her husband would often stay late into the night with their boys, but other parents who did not have an option would work all day and come in at all hours of the night, often missing opportunities to meet specialists and attend therapist appointments.

So, the family embarked on a trip to the nation’s capital to unite with other families and share their experience with lawmakers. The Stearns were able to meet with Senators Cindy Hyde-Smith and Roger Wicker and Representative Trent Kelly, to share their story and help the elected officials put a face with the issue.

“Our meeting with Representative Kelly went great; although we were scheduled to meet with his staff, when he heard the boys (and the noise that follows them everywhere) he came out to meet us and invited us into his office while we shared our experiences with him,” Stearns said. “Jack did his best to impress them with his language skills, and we showed both representatives the feeding tube that is surgically implanted in Oscar’s stomach and help keeps him alive. I hope it was helpful to put a face on some of the policies that they are enacting – cuts to programs like CHIP, for instance, will hurt kids just like Jack and Oscar.”

For more information on Zero to Three or “Strolling Thunder,” visit http://zerotothree.org.