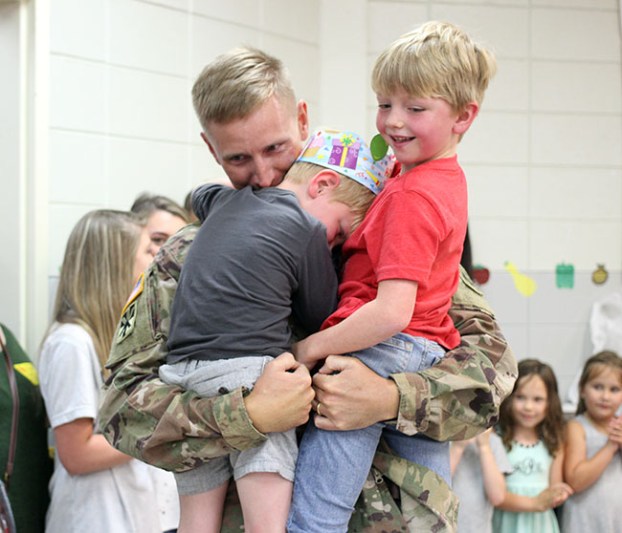 U.S. Army CW2 Michael Ferguson surprised his sons Sawyer and Dillon Ferguson upon his return from an overseas deployment, at Lafayette Elementary in Oxford, Miss. on Friday, May 11, 2018.

Sawyer and Dillon Ferguson got the best birthday present ever – their dad.

He wanted to surprise his two sons, Sawyer, 7, and Dillon, 5, who didn’t know he was coming home.

The boys both attend Lafayette Elementary School and had no idea the surprise that awaited them when they sat down in the cafeteria Friday around 11 a.m. for lunch.

Their mom, Jennifer, brought a cookie cake to lunch for their birthdays – Sawyer’s is Saturday and Dillon’s was Monday. The cookie cake was decorated like an American flag and instead of their names, it said, “Daddy’s Home.”

Moments after lifting the top off the top of the box, Ferguson walked into the cafeteria.

Sawyer saw him first and jumped into his father’s arms with his brother following close behind. The three hugged while the students and teachers cheered.

This was Ferguson’s fourth deployment overseas. He spent 10 months in Jordan and at Al Dhafra Air Base in the United Arab Emirates where he was a Technical Director for the Patriot Missile Weapons System.

Both he and Jennifer are Oxford natives. The couple also has a 2-year-old daughter, Ava, who was the first to see her father Friday morning.

“She cried a little bit,” Ferguson said at LES before surprising his sons. “Now she won’t leave my side.”

Sawyer said he was very surprised to see his father walk into the room and that he missed him a lot.

“I missed wrestling with him,” Sawyer said.

Sawyer and Dillon left school early with their parents to spend the day catching up and swimming in the family’s pool – and of course, some wrestling.

Parents from across the country gathered in Washington, D.C. this week for the Zero to Three organization’s “Strolling Thunder” rally,... read more