DeSoto Central sweeps Oxford for 6A North Half title 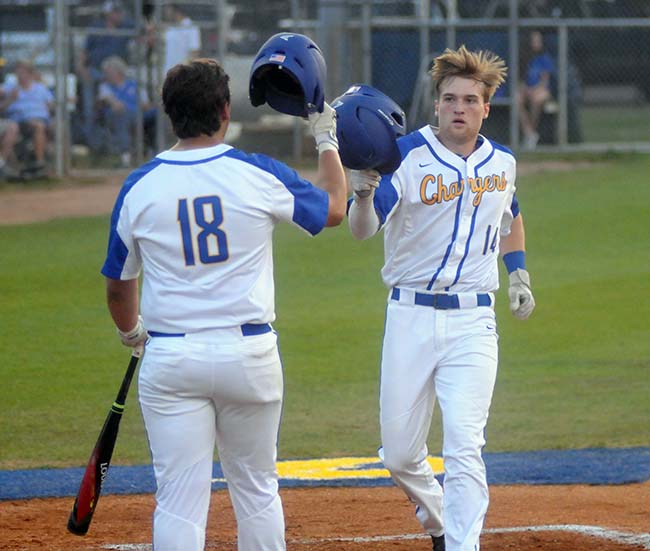 DeSoto Central proved their offense could explode for a big inning out of nowhere in Game 1 on Thursday. Oxford was aware and could still not avoid another devastating inning on Friday, giving up four runs in the fourth and falling 5-4.

The Jaguars took Game 2 at Edwin Moak Field, sweeping the Chargers and winning the Class 6A North Half championship to advance to next week’s Class 6A state championship against George County in Pearl. For Oxford it ends their first season in Class 6A, where they won the Region 2-6A title, and will mark the first time in the last four years they will not be playing for a state championship at Trustmark Park.

“Nothing I can ever say is going to take the pain away but one thing I don’t want them to forget nobody gave them any kind of chance at the beginning of this year,” Oxford coach Chris Baughman said. “I’m so proud of the fight we showed to get here. They’re going to look back on it and one day really be able to appreciate what they did here. It’s going to take awhile but they will.”

The series looked to be heading back to Southaven early with Oxford (23-11) grabbing a 2-0 run through two innings after solo home runs by Drew Bianco in the first and J.R. McClure in the second.

The led held through the first three innings but the deadly bats of DeSoto Central (27-8) showed up in the fourth. Peyton Mills hit a two-RBI double that cleared the bases, scoring Blaze Jordan and Hunter French to tie the game at 2-all. Later in the inning Jacob Compton hit a home run to score Mills, giving the Jaguars a 4-2 lead.

“They’re a microcosm of Madison Central at the plate,” Baughman said of the Jaguars. “They swing it really well and they have a lot of pop. They’re dangerous.”

Another costly mistake hurt Oxford in the next inning. A routine infield pop-up was failed to be caught by first baseman Jacob Malendez that would have ended the inning. Instead, the error allows Jordan to reach and French scored from second to make it a three-run lead.

Oxford responded with two runs in the bottom half of the frame, but the error provided DeSoto Central the insurance run they needed.

Tyler Smith got the start for Oxford and after Parker Stinnett pitched a complete game the night before, Tyler gave the Chargers six innings of work. He allowed five runs off five hits while walking one and striking out seven.

In the other dugout, Desoto Central’s Matthew Taylor locked down the Chargers offense for most the game. Through the first three innings Taylor recorded eight strikeouts, finishing with career best 13 on the night. He allowed four runs off six hits and walked one batter.

“We did what we said in the scouting report we could not do. We chased balls down,” Baughman said. “We let (Taylor) vary the curveball on us too much.”

The senior classes at Oxford in recent years have left behind championship resumes and this year’s nine seniors were no different. Led by Bianco, Smith, Malendez, Parker Stinnett, Clark Stovall and CJ Terrell the seniors racked up over 110 wins and went 32-3 in division games. They were also a part of the two state championship teams in 2015 and 2016 and made it back to Pearl last year, finishing runner-up to Pearl River Central.

“They’ve grown up as people. That’s probably what I’m most proud of,” Baughman said. “Obviously, they’re some really good baseball players. All of them have very bright futures and some of them are going to play this game a few more years.”