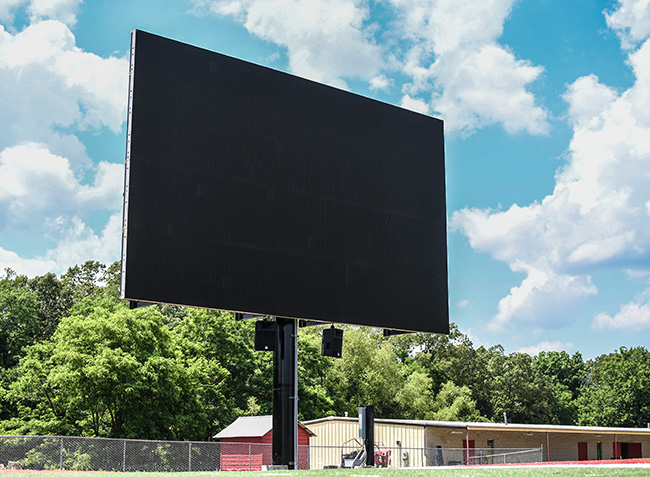 A new scoreboard has been installed at William L. Buford Stadium at Lafayette High School, in Oxford, Miss. on Monday, May 14, 2018. (Bruce Newman, Oxford Eagle via AP)

Things are about to be a lot brighter at Lafayette. In one corner of the end zone, anyway.

The school completed construction on a brand new scoreboard for the football field at William L. Buford Stadium last week. The project took less than a year from inception to construction after football coach Michael Fair approached athletic director Greg Lewis about wanting to change things up.

“Our school is growing at such a rapid pace that there is not a whole lot of money around for the extras that I feel like our guys deserve,” Fair said. “Whether it facilities or pads or whatever equipment it is that takes a little bit extra to get. I was just sitting around saying, ‘what could we do as a football program to bring in extra money?’ …then this jumbotron idea came up.”

After visiting other schools and speaking with coaches, including Madison Central and former Lafayette athletic direct Gary Hart, Fair had the plan in place. Implementing it would become the next step and after speaking with the booster club about fundraising options and local businesses about sponsorship opportunities on the board itself, enough money was raised.

Fair declined to comment on how much the new scoreboard cost to build.

The new video board is 20 feet tall and 35 feet wide, dwarfing the old scoreboard that used to stand where Lafayette’s newest toy now resides. Brandon High School was one of the first to build an all-digital scoreboard after completing their new football stadium a couple years ago.

With the newest addition to the athletic department comes new ways for fans to watch the Commodores play on Friday nights in the Fall. There will be three new cameras filming the game and showing a live feed along with the addition of instant replay, something rarely seen at the high school level.

Lafayette debuted the new screen during last Friday’s inaugural ‘Commodore Day’. The Commodores had an intra-squad scrimmage to cap their spring practices and the jumbotron worked without a hitch.

After seeing it in action there may be concerns of keeping the team’s focus on the field and not in the west end zone. That also includes the coaches.

“It’s just like a wide-screen T.V. Everything’s digital,” Fair said. “It just adds to the whole environment of a football game. …I caught myself watching the jumbotron and it was happening right in front of me. I was waiting for (one of the players) to break a long run and look up and see who was chasing them.”

The new screen is not exclusive to the football program. The soccer teams will also be able to use the video board during their home games.

Sporting events will not be the only activities using the board either. There are future ideas in place to have movie nights where families can sit on the field. The board even has the option of live streaming television or anything else that can plug into the system.